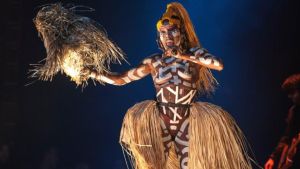 Opening her set with ‘Nightclubbing’, Grace Jones immediately owned Stradbally, tossing off her Grim Reaper robe to reveal head to toe Keith-Haring-tribal white body paint. “I know my Jamaican accent sounds a bit Irish,” Jones says, followed by “I’m surprised it’s not raining,” to huge cheers. It’s not raining, so let’s party like we’re in Studio 54. Jones is and always will be an inspired booking. Her charisma is bigger than the bass, her command more impactful than the entire security staff of a festival. She owns it. With constant costume changes, even the most casual observer or fair weather fan couldn’t help but realise why she’s an icon. The sound engineers on the Main Stage also need to be commended by beefy bass and crisp vocals. A fantastic start to the festival.

In three words: Get it gurl.