Fifi Rong: ‘Nobody else makes this kind of sound’ 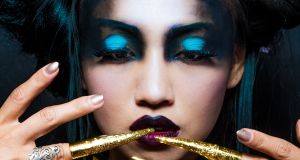 Whether she is making beats, singing in Chinese or guesting on a track by heavyweights such as Tricky or Skepta, Fifi Rong’s musical personality is as distinctive as it is curious. Over the course of two EPs and an album, the Beijing-born, London-based singer and producer has developed a dark blend of trip-hop, post-dubstep, jazz and traditional Chinese music. Somehow, she makes these disparate influences sit comfortably together.

Rong moved to the UK as a child, attending a boarding school near Bristol before continuing her education in Manchester and Scotland. After university, she moved to London and ended up working for independent music labels. Having spent more than half her life in the UK, Rong says the city feels more like home than anywhere else.

“I think I fit in much better in western society than in China, though I do inherit a love of the Chinese philosophy,” she says. “In my core there is a lot of Chinese tradition, but the current, modern kind of Chinese, especially after the Red Revolution and how the communists and other people are shaping those traditions in the current, modern China, I can’t really fit into their thinking. I feel like I’m always an outsider.”

Rong had always had a strong interest in music, but it was only after completing her master’s degree that she began to seriously produce her own work. With encouragement from friends and people she met through work, she began to sing on the tracks she was making in her bedroom. Soon it became an obsession and took over her life completely.

“The lucky thing is that I’m a bit of a hermit myself,” she says with a laugh. “I live in the Soho Chinatown area, which is the busiest area of London, but I never go out. It’s my lifestyle. I like to be quiet, to be myself. That’s my nature. A lot of people would go crazy if they live and work in the same room. That’s the challenge, but I think I have natural benefits with my personality. My personality is quite Zen-like, quite calm. I like to be alone most of the time because I’m very reflective and introspective.”

Rong still prefers to work alone. She records late at night in her bedroom rather than go to a studio, because the latter feels less intimate, “surreal”. She has gradually developed a stage presence that complements her recordings. She takes the often quiet and shadowy tracks to a different place entirely in front of an audience but it has not been easy.

“I hid in the studio for quite a few years before I realised that I have to go out to be taken seriously as an artist,” she says. “That’s just what it takes: to push myself out there. That’s the only way I could learn whether or not it was for me. That experience, that feedback, I learned and I gained the confidence that I am a performer. I didn’t know that, but it’s like I discover myself again and again every time I push myself to do something new. With my recordings, it’s introspective, it’s my world. Whatever you’re listening to, you’re coming into my world, but when I’m performing, it’s your world as well. That’s the difference.”

Although Rong hasn’t spent much time on the road in the UK, she found herself invited to perform in China. She played eight cities there on her first serious tour in 2014, even though she had not released any music there. Her songs had been discovered and shared on Chinese social media and streaming services, which created an organic audience eager to hear her perform.

It was a strange experience – chronic air pollution, indoor smoking and clean, modern venues being just some of the differences from the UK – but it was a “special feeling” nonetheless.

“I was proud, but it was nerve-racking. The first few shows I had to speak Chinese. That was new to me; I didn’t know what to say. I couldn’t even say a sentence in full, not because of the accent but there’s no habit of speaking that language on stage. It’s hard to get your head around because everything is locked, censored or separated from the rest of the world. They have their own banking system, their own PayPal, their own Twitter, their own Facebook, their own streaming service.”

Having earned an audience as multicultural as her music, Rong is beginning to get a sense of what different people are finding so alluring in her multifaceted songwriting. With so many different ideas happening at once, it would be hard not to find something to latch on to.

“English people understand that hint of something that comes from outside, but essentially my music is very rooted in the British electronic sound,” she says.

“The difference is the tone, the phrasing, the accent. It’s a little bit off, but not too much; I still need to make sure people understand what I’m singing. Chinese people, they feel it’s familiar. They see I’m a Chinese person [and] I’m doing something different. They quite naturally feel close to the sound because it reminds them of some old Chinese stuff, maybe, or some popular Chinese stuff. But there’s a lot of things that they don’t know, that comes from the outside, because nobody else makes this kind of sound. They like the western part of me.”

Dancing with the Stars: Love Islander Yewande Biala voted off as public save Fr Ray Kelly
8