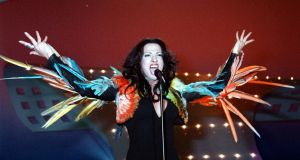 Ukraine might be barred from the Eurovision if they proceed to ban Russian competitor Yulia Samoylova from performing. They’re doing so because she entered Crimea via Russia rather than via the Ukraine for a performance in 2015. The Ukrainian authorities said, in a compromise, that Samoylova could perform via a satellite link up.

The countries have form when it comes to Eurovision scraps. Last year, the winning Ukrainian entry, Jamala’s 1944, a moody ballad about the historical expulsion of the Crimean Tatars by Stalin, was a not-so-coded message about the Russian occupation of Ukraine. Though the European Broadcasting Union (the organisers of the Eurovision) strenuously try and keep explicit political statements out of the competition – countries have always used it as a platform for geopolitical statements (at the very least in the form of tactically voting for neighbours and against enemies).

Here are some of the most notable examples.

In 2008 it was revealed by documentary maker Montse Fernandez Vila that Spain’s win in 1968 with Massiel and La, La, La (a good linguistically simple nonsense title generally goes down well in the Eurovision) may not have been based entirely on merit, but on behind the scenes lobbying and bribery by the Spanish state broadcaster. This is, I’m sure, cynical guff. Why can’t people just be more trusting of the brutal dictator of Spain? Sir Cliff of the United Kingdom came second with the ironically titled Congratulations. He has hated fascism ever since.

1974 - The Portuguese entry starts a revolution

E depois do adeus (And After the Goodbye) by Paulo de Carvalho didn’t win the 19th competition in 1974, but twenty days later it was used as a coded radio message to rebel military officers to start the Carnation Revolution that brought Portugal from dictatorship to democracy. The winning entry that year, Abba’s Waterloo, merely started a revolution in our hearts.

1978 – The Jordan broadcasters lie about the winner

In 1978, a rough period in the Middle East, the Jordanian state broadcaster refused to broadcast the winning Israeli entry Abanibi by Izhar Coehn and the Alhpabeta. News reports told viewers that Belgium won. An autocratic state can do that sort of thing.

It’s not the first time a country has refused to play an entry. Turkey refused to broadcast Greek’s My Lady, My Lady in 1976 because they believed it was about the Turkish invasion of Cyprus two years before. Lebanon tried to avoid broadcasting the Israeli entry in 2005 (Lebanese broadcasters are forbidden from recognising the state of Israel) but they were made withdraw from the contest instead.

When we sent Dustin in 2008 to mock the contest in a fit of peak boom-time hubris most Europeans just turned their televisions off for three minutes and awaited our economic downfall. We’ve been trying to get back in their good books ever since.

Flags are ever a controversial phenomenon at the Eurovision and last year the European Broadcasting Union issued, then retracted, a list of supposedly controversial flags (these included those of the Basque country, Crimea and Wales). In 2000 the Israeli entrants, Ping Pong, finished their performance of Be Happy with a plea for peace and by unfurling Syrian flags to the shock of many of their country folk. The entry was quickly disowned by the Israeli broadcasting authority and it emerged that some of the performers were journalists who had entered the contest as a joke. Like John Waters does every year. Also, see my Eurovision entry here.

The geographical vagueness of the Eurovision often annoys pedants. You may have noticed that the boundaries of Europe as defined in the Eurovision have become more and more elastic over time. Australia, which is in the far, far south of Europe, was involved in the competition for the first time in 2015.

The general rule is that if your country has a public broadcaster who joins the European Broadcasting Union it technically doesn’t matter if you’re geographically situated on another continent. Last year at the event Sietse Bakker, then organiser of the competition, explained it to me: “Europe’s map has changed for thousands of years . . . Our view was that Eurovision is not so much about the ‘Euro’ part but the ‘vision’ part, and if Australians say ‘We believe in that vision’ they are welcome.”

1998 – The Eurovision “comes out” with Dana International

In 1998 the brilliant transgender singer Dana International won the competition for Israel with her song Diva. Karen Fricker, an academic, sometime Irish Times writer and Eurovision aficionado, tells me that 1998 is often recognised as the year the competition “came out” as a LGBT phenomenon as far as casual viewers were concerned (though all the gay fans had obviously known for some time).

Dana International’s inclusion in the contest led to Orthodox Jews protesting in the streets of Israel and she received some death threats. Not remotely on the same scale, but our own Pat Kenny was also a bit mean about her in the RTÉ commentary.

The differing attitudes of host countries to gay rights comes up repeatedly in the competition, with its large gay fan base often having to travel to countries with repressive attitudes to sexuality. At last year’s competition many fans expressed anxiety about the possibility of having to travel to increasingly repressive Russia (this was brought up at post event press conferences I attended). Indeed, in 2014, autocratic dictator and part-time glamour model Vladimir Putin whinged that the competition was a “Europe-wide gay parade”. Possibly in response to this, the charismatic bearded drag performer Conchita Wurst won that year for Austria.

The European Broadcasting Union is okay with vague Utopianism and talk of peace across borders and unity and love for all mankind and the fact that children are the future (I disagree. I think middle-aged journalists are the future). But they’re not so hot on explicit references to recent wars between, say, Georgia and Russia, as was the case with Stephane and 3G (a traditional Georgian name)’s We Don’t Wanna Put in. The plucky duo refused to change the lyrics and withdrew from the contest.