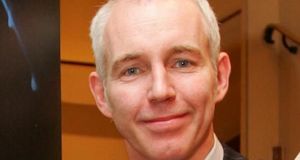 The five acts in contention to carry Ireland’s Eurovision hopes to Vienna this year for the song contest’s 60th anniversary have been announced by RTÉ and can be heard for the first time on The Ray D’arcy Show on RTÉ Radio One. Photograph: Bryan O’Brien

The five acts in contention to carry Ireland’s Eurovision hopes to Vienna this year for the song contest’s 60th anniversary have been announced by RTÉ.

The five, the youngest of whom is 16 – two years younger than Eurovision legend Dana was when she won for Ireland in 1970 – will perform live at Eurosong on The Late Late Show next Friday, to compete for the chance to represent Ireland.

Zambian-born Alex Saint said he feels “this is the year of the rap” and will be performing the rap song She’s So Fine, written by Tony Adams-Rosa, with the MJs, a young female vocal group from Co Derry.

Kat Mahon from Newtownforbes, Co Longford, was Longford’s representative in the 2014 Rose of Tralee and will sing Anybody Got a Shoulder, written by veteran singer-songwriter and previous Eurovision winner Charlie McGettigan.

Erika Selin has perfect Eurovision pedigree, coming from Sweden, but she says “Ireland is one of the absolute top nations in the Eurovision Song Contest”. She will sing Break me up by Gustav Eurén, Niclas Arn and Danne Attlerud.

Nikki Kavanagh was part of the 2010 Irish Eurovision team headed by Niamh Kavanagh, and in 2011 she missed out to Jedward to represent Ireland. She describes the song Memories, written by Lee Anna James, Elena Morosanu, Simon Gribbe, Johnny Sanchez and Dimitri Stassos, as “current” and “edgy” .

16-year-old Molly Sterling, a self-taught musician from Nenagh, Co Tipperary, co-wrote Playing with Numbers with Greg French. The song is about the risks people take every day in love and in life, and the experiences of taking the road less travelled.

The songs can be heard for the first time on The Ray D’arcy Show on RTÉ Radio One from 3pm today. The winning act will be selected on The Late Late Show by a combination of public and regional jury vote. Ireland will compete in the second Eurovision semi-final on May 21st for a place in the final in Austria on May 23rd.

The Future of Capitalism, Facing the New Anxieties review
9