Dancing at the traffic lights

An Irishman’s Diary: A Dublin suburb goes back to its roots 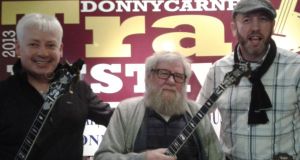 Padraig McKenna (a cousin of Barney’s), Seán Óg McKenna (a brother), and Gerry Tully: all performing at the Donnycarney Trad Festival next month.

Dublin is not short of musical events, it’s true. If anything, the choice can be bewildering. But a variety inexplicably lacking, it seems to me, is the community-based trad festival. Yes there’s the one in Temple Bar in January: a recent and welcome addition to the calendar. And yes there’s the whole St Patrick’s week spectacular, of which traditional music is a subset.

There are also things such as the Larkin Hedge School and the Frank Harte Festival. But those all tend to be city-centre events, rather that sprouting from local communities. In the suburbs and villages of greater Dublin (barring Skerries, which is stretching it a bit), I can think of almost nothing.

To the best of my knowledge, there’s no Feile Tommy Potts in the Liberties; or a Luke Kelly Weekend in Sheriff Street; or a Leo Rowsome summer school in Harold’s Cross. Even Frank Harte is celebrated with an event in the Teachers’ Club on Parnell Square, rather than in Chapelizod, where he was born.

The contrast with Clare, to take a not-so-random example, is striking. Almost every hamlet in that county can boast at least one semi-legendary musician, living or dead, and few of them neglect to celebrate it. From the Micho Russell festival in Doolin (February) to the Willie Keane weekend in Doonbeg (late October), it’s a packed calendar, spring to autumn.

You don’t even have to be known on first-name terms in Clare to be immortalised. For years they had the “Eigse Mrs Crotty” in Kilrush, in honour of a great concertina player (aka Elizabeth); although I notice that one seems to have fallen off the list of late.

Clare is a special case, admittedly. Yet all over Ireland, wherever a community has produced musical greatness, a commemorative event usually results. Maybe the diffused sense of identity in modern Dublin, where what were once separate villages have long since expanded into each other, explains the city’s relative poverty in this regard.

Or maybe it’s that, being part of the biggest centre of population, Dublin suburbs are not places that offer a weekend escape, really. Unless you’re from Doolin, say: in which case a few days in Donnycarney might be a welcome break from all the peat smoke and Atlantic air.

I mention Donnycarney because, in what could become a precedent, that Northside suburb will next month host its own inaugural trad music event. It’s to be called simply the Donnycarney Trad Festival. Not because the village doesn’t have a famous son to commemorate – on the contrary, it has at least two.

It was from here that the great musical missionary Paddy Moloney set out on on his life-long (and continuing) voyage around the world. And it was Donnycarney too that produced the late, lamented Barney McKenna of the Dubliners. Not only that, it also produced Seán Óg McKenna, Barney’s brother and a fine banjo player in his own right, who is still happily with us and will be central to next month’s event.

That Sean Óg is less famous than Barney is no reflection on his music abilities. He too had all the qualities necessary to ride the great folk revival of the 1960s and 1970s, including a world-class beard. But he admits he never enjoyed traveling much, unlike the brother, whose many talents included one crucial for touring band members: the ability to sleep anywhere, even on a bus. So for Sean Óg McKenna, at least, the Donnycarney Trad Festival is a welcome development.

Its musicians apart, Donnycarney is best known for two things: having the official home of the Dublin GAA teams, Parnell Park, and being where Charles J Haughey grew up. For these and other reasons, it still has a strong sense of identity, even though its exact boundaries are a matter of debate.

Historically, it stretched down to the sea at Fairview. But most modern Donnycarneyites would claim no further south than Mount Temple Comprehensive (thereby sharing the credit for U2). Meanwhile, at its northern end, the boundary used to be called Puckstown Lane, now Collins Avenue. And this may explain why Donnycarney has produced some very notable puckers: none greater in recent times than Alan McCrabbe, Dublin’s first All-star hurler in a generation.

Running from June 13th to 16th, the festival will touch all aforementioned bases, with traditional music sessions, local history presentations, and a hurling tournament. In what may be a coded nod towards Mr Haughey – a man who provoked many questions in his time – there will even be a big “community quiz”. And harking back to an era when this really was a village, the weekend will also include a “Céilí at the Crossroads”, albeit in what is now the Donnycarney church carpark.