Electronic music is everywhere, except the classical mainstream. This should change 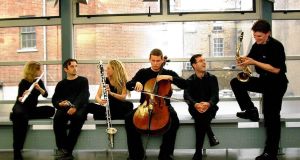 Crash Ensemble, who performed as part of the Drogheda Arts Festival.

Lists of the year’s best this or that, or of people’s favourite reading or listening, are obviously entertaining. But they are altogether more of a challenge if you try to put your own preferences in some kind of order.

I was very struck a couple of years ago when I interviewed Finnish composer Kaija Saariaho and asked her about the major landmarks of electronic music. I put it to her that naming the peaks of the first 60 or 70 years of the piano sonata or the string quartet was a relatively straightforward proposition. And I wondered what she might suggest for the musical output of the electronic studio, in which she has worked so effectively.

She shied away from answering on the spot, but said she would think it over and then send me a list. She was as good as her word, and her list of choices is worth repeating here: Luigi Russolo’s Corale, Olivier Messiaen’s Oraison, Pierre Schaeffer’s Symphonie pour un homme seul, Karlheinz Stockhausen’s Gesang der Jünglinge, Iannis Xenakis’s Bohor, Jonathan Harvey’s Mortuos plango, vivos voco, and François Bernard Mâche’s Kowar. It’s not a list that I can imagine many music lovers being able to come up with.

Electronic music is everywhere in the 21st century, but it’s still well away from the classical mainstream. Even the peaks are unlikely to have impinged on the vast majority of concert-goers. The lovers of Bach and Handel, Brahms and Beethoven, Stravinsky and Shostakovich can all get on very nicely, thank you, without ever bothering about the world of electronics.

Ireland even has a leading institution in the field, in Belfast’s Sonic Arts Research Centre

For fans of Steve Reich and John Adams, it’s a different story. The aesthetic identity of Dublin’s Crash Ensemble is intimately wrapped up with the use of computers and electronics. And Ireland even has a leading institution in the field, in Belfast’s Sonic Arts Research Centre (SARC), part of Queen’s University. SARC was built for the purpose of working in that specific area.

It’s tempting to see electronics as a kind of musical umbrella, bringing together like-minded creators and performers to shelter under its cover. But the reality is rather different.

The recent Music Current 2017 festival at Dublin’s Smock Alley theatre is described as “a showcase for the best in new Irish and international contemporary electronic music”. But the musical approaches represented have about as much in common as you might get from a showcase of new works for piano, flute, or string quartet.

One of the pleasures of Music Current is the subtlety and sophistication of the sonic manipulation. Crash Ensemble inclines towards a use of electronics that might almost be geared towards justifying the group’s name.

Dublin Sound Lab, the group behind Music Current, favour refinement over immediacy of impact, and the relatively confined but high-ceilinged space of the Boys’ School at Smock Alley is currently one of the most pleasurably immersive Dublin venues for a surround-sound experience.

The highlights of the festival events I attended were both for voice (Elizabeth Hilliard) and electronics. But Steven Whiteley’s [ ][ ][ ][ ][] and Silvia Rosani’s Omertà were as different as you could imagine, the first a kind of emotional rollercoaster driven by a short text inflected in perpetually-changing ways, the second an exploration through a shifting, microtonal soundscape of just one word, the loaded Italian word of the title.

I had to miss Perisonic, the multimedia finale to Music Current, in order to attend the first performance of James Dillon’s The Louth Work (Orphic Fragments), presented by Louth Contemporary Music Society as part of the Drogheda Arts Festival.

Dillon is a formidable Scot with a reputation for writing challenging music that’s more closely aligned with German taste in contemporary music than British. The Louth Work, performed by the wonderfully controlled Taiwanese soprano Peyee Chen and five members of the Crash Ensemble under Sinéad Hayes, is like an extended meditation, visually subdued (both singer and conductor remain seated) and with the voice often intentionally obscured behind the furling and unfurling of the instrumental writing. No texts were provided at this performance.

The Louth Work also includes electronics, the effect sometimes almost subliminal, like a food flavour you are aware of but can’t quite identify. On a first hearing, the work did seem rather too long, as if the composer somehow experienced difficulty drawing it all to a conclusion.

Up at the Sligo International Chamber Music Festival on Sunday there was another electronic connection, a transcription for saxophone trio of Paul Hindemith’s Des kleinen Elektromusikers Lieblinge, originally for three Trautoniums (the Trautonium was one of the less successful electronic instruments invented in the 1920s and 1930s).

Even the polished playing by members of the German quartet Clair Obscur could not find much meat in this particular piece. The day’s real substance came in a light and deft performance of Ravel’s Piano Trio by the Amatis Trio and of Thomas Adès’s mesmerisingly complex, post-Ligetian Piano Quintet by Hugh Tinney with the ConTempo Quartet. Cassiopeia Winds provided light foil in Ibert’s Trois pièces brèves, and some more substantial Hindemith in the form of the Kleine Kammermusik for wind quintet.