Blurred Lines v Got to Give it Up. You think they're the same?

The heirs and attorney of the late soul singer Marvin Gaye react to the $7.4 million judgment against recording stars Robin Thicke and Pharrell Williams, who a jury found plagiarised the Motown artist. Video: Reuters 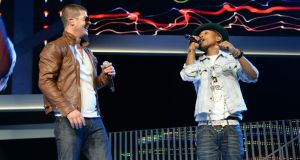 Robin Thicke and Pharrell Williams during a performance at the University of Arkansas last year. Photograph: Jamie McCarthy/Getty Images

Recording stars Robin Thicke and Pharrell Williams have been found liable for copyright infringement in a lawsuit accusing them of plagiarising the late soul singer Marvin Gaye in their hit single Blurred Lines.

The US district court jury in Los Angeles sided with Gaye’s heirs in the closely watched litigation, finding that parts of his 1977 hit Got to Give it Up were lifted by Thicke and Williams for their summer 2013 R&B chart-topper.

Blurred Lines v Got to Give it Up

The jury verdict included a judgment of $7.4 million to be awarded to Gaye’s heirs, including $3.4 million in profits that Thicke and Williams were found to have derived from the infringement.

Several other parties sued by Gaye’s estate, the rapper T.I. and various record and music companies, were cleared of copyright infringement on Got to Give it Up.

Gaye’s daughter, Nona Gaye, hugged her attorney and wept as the court clerk read the verdict, capping a week-long trial that delved into the boundaries between artistic inspiration and theft.