A Winged Victory for the Sullen: the dance album

Well, maybe not quite. But the modern classical duo Dustin O’Halloran and Adam Wiltzie did team up with choreographer Wayne McGregor, who asked them: what are the boundaries of your musical universe? 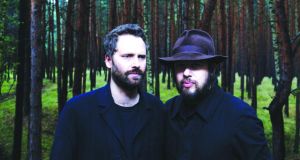 ‘There are few people I can write music with, and it was a surprise to us both that it worked so well,’ says Dustin O’Halloran, left, of working with Adam Wiltzie

Dustin O’Halloran and Adam Wiltzie met in Bologna in 2007, when Wiltzie was touring with Sparklehorse. A creative spark was lit, and A Winged Victory for the Sullen emerged, harnessing drone and ambient, to create their own version of modern classical music. Their latest record, Atomos, is a collaboration with choreographer Wayne McGregor, noted for his inventive approach to dance and intuitive relationship to music.

“[He] got in touch with us after listening to our first album,” says O’Halloran. “He played it during the dancers’ warming-up period and found that they responded to it. I can honestly say he was one of the best collaborators I have worked with, as he really trusted us to create the musical world. His input was more abstract and conceptual, revolving around atoms, their formations, time and space, and the relationship all this has to the human body, which was the catalyst for the new record. He also asked us, ‘What are the boundaries of our musical universe?’ Sometimes you need these little pushes to explore and try things, and in the end I think it helped us understand that we can still retain our sound but explore new worlds.”

Wiltzie agrees. “My love for him is mostly because he is an extremely humble person.The ideas behind his work are very deep . . . I have always felt that conceptual art only really makes sense to the person who created it, and if it resonates with you then you should feel blessed.

“He guided us with pictures of various forms of light, and vintage Youtube science videos, and went off on a bit of a Stephen Hawking diatribe at the initial meeting, but it was the concepts that resonated with me. I reckon it’s soporific simplicity.”

Atomos was conceived in 2013, a year O’Halloran has called “explosively creative”, recorded in studios in Brussels, Berlin and Reykjavik. Environment has always been an integral part of the work. “There is always something in the recordings from the place you are, the smells, the food, the climate, but mostly it was for the acoustics.Our friend and sound collaborator Francesco Donadello has built a beautiful analogue studio in Berlin, where we did a lot of recording and mixed to tape. And other string recording was done at Jet Studios in Brussels which has an incredible-sounding room built in the 1950s; it has a lot of mojo.”

The recordings strengthened the relationship between O’Halloran and Wiltzie, something particularly important for O’Halloran, since he mainly composes alone. “There are few people I can write music with, and it was a surprise to us both that it worked so well,” he says. “You can’t really plan these things, and I’m just glad we were were able to meet when we did and create this new world. It’s been one of the most satisfying collaborations I have had to date, and beyond that, I think we just found a lot in common and a good friendship.”

For both American musicians, moving to Europe many years ago has been central to their stories. O’Halloran, who lives in Berlin, calls it “profound . . . I would not be doing what I do now if I had not made this move. I first moved to Italy and was married, and there started working on my solo piano work. It’s all been a journey from there.”

For Wiltzie, who lives in Brussels, it has been “essential . . . Growing up in such a monolingual environment developed a kind of resentment of who I am, so now being able to look at my past from a kind of fishbowl perspective across the pond has helped me in so many ways I cannot even begin to describe.”

Music wasn’t where Wiltzie’s heart initially lay. A promising tennis player, he was nationally ranked as a teenager (his godfather, Chuck McKinley, won Wimbledon in 1963).

“I reckon I was just too fallible for the sport,” he says. “There was such a fine line with so many players, that they never took that last step to be truly great. Some of the qualities I lacked were better suited for the art world, I suppose. The worlds have similarities in the sense of being alone and crafting something beautiful, but the glacial difference that resonates with me is the competitive part, which I feel is so damaging to the artwork; this is something you see everywhere. Art will always be subjective, and tennis will always have absolutes, because in the end there is always a winner and a loser, which sometimes is the simplicity that I will always cherish.”

And yet both O’Halloran and Wiltzie have had some success with awards, most recently at the Golden Globes. Wiltzie played on the award-winning soundtrack for The Theory of Everything (scored by Jóhann Jóhannsson), and O’Halloran composed the music for the excellent Transparent, which won best TV series, as well as best actor for Jeffrey Tambor.

“Jeffrey Tambor’s acting really drives it for me,” says O’Halloran. “He is so fragile and strong at the same time. It’s really universal, and there is this nostalgic melancholy that I connected with: the idea of the passing of time, of who you want to be, but where you are at the moment. And just the tragic, comic way life is.

“This has been a special project, for sure, on many levels. Jill Soloway has been a friend of mine for a long time, and I think she was listening to my second solo piano album a lot when writing, so somehow it’s in the DNA of the show. I’m looking forward to our next season, and winning the Golden Globe was a nice way to start.

“I have also scored a beautiful film shot in India by Prashant Nair called Umrika which premiered at Sundance [it picked up the audience award in the World Cinema Dramatic Competition],” says O’Halloran. “I spent a month in India, and when I came back I had all these experiences to draw from. It’s also my first orchestral score. I am also planning on working on new solo material, so it should be another busy year.”

And while Atomos has been unfurling itself live, Wiltzie feels the same. “We will be taking a break and going in our respective caves to do some work separately. I have a solo record coming out in March under the moniker Adam Bryanbaum Wiltzie, a short collection of orchestral out-takes from a recording session in Budapest with a large orchestra from one day last summer. And it seems at this point that everyone wants to know when the new Stars of the Lid opus will be released; it may be next year, or maybe never.”

Winged Victory for the Sullen perform at the Pavilion Theatre, Dún Laoghaire, on February 10th

Are the political parties tuned in to the needs of musicians?
8