The old post office in Kilnaboy, Co Clare, was once a place where locals chatted and kept in touch. And so it became again in Deirdre O’Mahony’s artistic re-creation 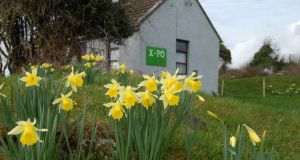 Socially engaged: Deirdre O’Mahony made X-PO a focus for the community

People tend to think that the rule book for the visual arts was banished forever when Marcel Duchamp submitted his urinal to the International Exhibition of Modern Art, at the 69th Regiment Armory in New York, in 1917. It took a bit longer for the old order to change in this country. And despite the Rosc exhibitions, new media works, performance art and other manifestations of the modern, even the most avant-garde in Ireland still had their perceptions of art extended when Deirdre O’Mahony reopened the old post office in Kilnaboy, Co Clare, and, in true Duchampian fashion, called it an artwork.

To be more accurate, she reopened the house that had been occupied by the last postmaster, Matty Rynne, and his parents before him, and the post office that they ran out of their tiny living space. O’Mahony didn’t run it as a post office, but she and the local community ran all the other things that the old post office had represented: a place where people met, chatted, exchanged local news and kept themselves in touch with whatever was going on in the area.

It was programmed to show art and to facilitate the making of art, to put archival photographs of local life on show – many for the first time – to host singing, set-dancing, sewing, meetings of a local history and mapping project, and whatever else presented itself in a place that had no other obvious centre for this kind of communal interchange.

O’Mahony drew on the history of this particular post office, making special reference to Rynne, who had been born and raised there, who was kept at home in the post office because his parents thought he was too delicate for the kind of things that other lads of the area did. In the 1940s, 1950s and 1960s Rynne had taught himself to build a crystal radio and to communicate with other radio buffs in parts of the world far beyond northeastern Clare while taking over his parents’ role at the post office, thus becoming the key communications man in the local community too.

He combined the local, national and international almost as a matter of course. No need to call attention to it. O’Mahony guaranteed his continuing presence by scraping back all the soot above Rynne’s Aga range and painting his portrait using some of those sooty scrapings, at the heart of the project and its symbolic guardian.

What made X-PO an artwork were the artist’s intention to so designate it and her insistence that a socially engaged project like this, which was all about sustaining communities in rural Ireland, is a valid form of arts practice. If the task of art is, as Paul Klee believed, to make the invisible visible, what X-PO has done is to show to its own community how important it is while showing the rest of us that traditional centres of community action have value far beyond the sale of stamps and distribution of pensions.

O’Mahony and her team have gone on to examine the sustainability of turf-cutting and food provision, the adequacy of healthcare in scattered communities and those issues that make rural Ireland a living entity, not what the architect Dominic Stevens described as the landscaped suburbs of Dublin and Cork.

The title X-PO playfully points out O’Mahony’s ambitions for this community, pitting this former post office against the international expositions, or expos, that have come to replace the old world fairs.