Modern Ireland in 100 Artworks: 1994 – The Country Blooms, a Garden and a Grave, by Alanna O’Kelly 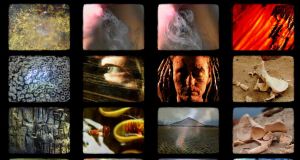 Innovative: from No Colouring Can Deepen the Darkness of Truth, part of Alanna O’Kelly’s mixed-media installation The Country Blooms, a Garden and a Grave

The Glen Dimplex Artists Award was presented for the first time in 1994. The first winner, chosen from a strong panel by an international jury, was Alanna O’Kelly for her trilogy The Country Blooms, a Garden and a Grave (1992-5). O’Kelly took the prize, which was run in conjunction with the recently established Irish Museum of Modern Art, not only for her technically innovative artwork, with its wide-ranging exploration of traditional and newer forms of expression, but also for making visible a festering wound at the centre of Irish life: the Great Hunger and its legacy.

It was a subject rarely touched on in Irish art until then, and never in O’Kelly’s holistic way.

She was not inspired by the pending 150th anniversary of the Great Hunger, in 1995, which was to attract more commercially minded and conventional responses in bronze both in Ireland and in Irish settlements abroad. Governmental and tourism-led initiatives to capitalise on the anniversary spawned a flood of sentimental projects all over the country, commemorating famine and victimhood, ironically during the first flush of Celtic Tiger prosperity.

Those projects could be read as an attempt by a newly confident Ireland to seal off a tragic period rather than as a national project to understand its ongoing impact. O’Kelly’s response to the Famine, on the other hand, came from an appreciation that loss and emigration were still live issues, connecting Irish history to ongoing famine in the developing world.

While studying at Slade School of Fine Art, in London, O’Kelly was both appreciative of the stimulation of her new life but also alienated as an Irish woman at that moment in time. The 1980s were tough for the Irish in Britain, with IRA bombing campaigns in English cities and fighting on the streets of Belfast.

O’Kelly was brought face to face with deep-seated Irish anger and pain, especially among those who felt the need to stifle signs of Irishness in order to live and work as emigrants.

She turned to Irish songs and taught herself to keen as a way of connecting with home and history; she used keening in Chanting Down Greenham, a performance work inspired by the protests against nuclear missiles at Greenham Common, an RAF base west of London. She also began to explore the impact of the Famine on herself and on Irish people generally.

The trilogy she made about the Great Hunger, shown in 1994 but modified over the next year or so, eschews traditional forms of visual expression. It draws on performance, tape and slide installations and video work, incorporating references to nature, the landscape, childbirth, nurture, death, decay and rebirth.

It makes loss visible and aural, through images of abandonment and dereliction, the sounds of breathing, the recitation of place names, keening and singing in the Irish language, almost wiped out by the Famine.

It acknowledges pain and the need for public grieving and connects that to Irish history through songs and images, creating a space for loss and a model for that grieving. In so doing it creates an opportunity for healing to happen, instead of placing expensive bronze monuments as sticking plasters on a living wound. Pertinently, it reminds its audiences of the ongoing problem of world hunger.

O’Kelly’s work was radical in the 1990s because it was technically adventurous, particularly in the use of sound, but also because it was neither synthetic nor object based but inspired by nature and the human body. It led to a commission to present new work for the São Paulo Biennial in 1996 and to acquisitions of her work by the Irish Museum of Modern Art and the Irish Great Hunger Museum, in Connecticut. Appropriately, there is a permanent installation from this trilogy in the Workhouse, Carrick on Shannon, one of the sites referenced in the work.