The influential, critically acclaimed artist poses many questions, not least on national identity, history, censorship and the cultural position of painting 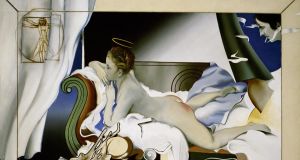 Beyond the white cube: lest anyone be fooled into thinking that Micheal Farrell’s message was contained within the artwork, his painting spills over on to the frame of Madonna Irlanda

There is more than a touch of arrogance in Micheal Farrell’s subtitle for Madonna Irlanda or the Very First Real Irish Political Picture. But Farrell makes up for this in the range of political issues that he confronts, most particularly questions of national identity, censorship, history, modernism, feminism and the positioning of painting in Irish culture.

Farrell was born in Kells, in Co Meath, but was educated at Ampleforth College, the English Catholic boarding school, and studied commercial art at St Martins in London.

Critically acclaimed in the 1960s for his hard-edge abstract paintings, Farrell went to live in Paris in the early 1970s. He was devastated by the news from Ireland and felt obliged to respond, not only to the Troubles but also to the treatment of women and the difficulty of speaking out freely as an artist, especially when compared with the circles he moved in in France.

He told Maev Kennedy in a 1977 Irish Times interview that he found abstraction too limiting for the issues that energised him now, saying: “I wanted to make statements, using sarcasm, or puns, or wit, and all of these I could not do before because of the limited means of expression I had adopted.” The result was a decisive return to figuration.

Seeing one of the most famous French nudes from the 18th century, François Boucher’s portrait of Louise O’Murphy, Casanova’s protegee and the mistress of King Louis XV, prompted Farrell’s Mademoiselle O’Murphy series (1976-78), which forces a reinterpretation of the concept of “Mother Ireland”, not as the shawled women with sturdy Irish boy children of Maurice Mac Gonigal and Seán Keating, nor as the haunting figure with the harp from John Lavery’s banknotes, but as a saucy nude, equally at home as a haloed saint or as a shameless whore.

The couch she reclines on in such a carefree fashion contains the last references to Farrell’s earlier hard-edged forms (his own personal art history), while a more hallowed icon from Renaissance art – Leonardo da Vinci’s Vitruvian Man – lowers a protective hand to his genitals in the face of her cool appraisal.

If Lavery’s Caitlín Ní Houlihan represented an age when culture and the arts were valued, the burning book in this painting, of no apparent interest to Farrell’s Madonna, reminds the viewer of ongoing censorship and the other constraints under which Irish creativity still operated in the 1970s.

It has been said, jokingly, that there were no nudes in Ireland before The Late Late Show in the 1960s. Certainly, despite a few paintings, such as Barrie Cooke’s Sheela-na-gigs (the entry for 1960 in this series), there was no established genre of the nude in this country. In one bold gesture Micheal Farrell changed all that. In keeping with his integrity as an artist, he included a self-portrait in the top right-hand corner of the painting, in which it is clear that his interest in the model on the couch (like many illustrious artists before him, but rarely revealed) is sexual.

Lest anyone be fooled into thinking that the artist’s message was contained within the artwork, the painting spills over on to the frame. In this Farrell lends weight to the 1976 publication Beyond the White Cube, by his friend and fellow Irish artist Brian O’Doherty, which argues that the separation of art from life outside the gallery is both damaging and aesthetically compromised. For Farrell, too, art was an essential part of the real world.

Blood: A disappointing journey into the Irish psychosphere