Making culture landmarks, one street at a time

Irish street art is growing in scale, quality and ambition – and now it even has ministerial approval as it transforms our towns and cities 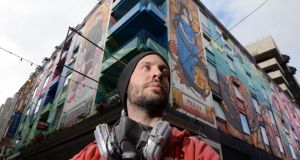 So loud, so bold: James Earley with his Joycean makeover of Blooms Hotel in Dublin. Photograph: Dara Mac Dónaill 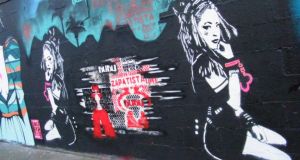 So loud, so bold: Street art in Dublin by Kin MX and Bubu of Minaw Collective. Photograph: Dublin Urban Art 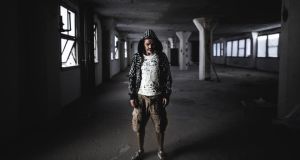 So loud, so bold: street artist Fin Dac, who is artist in residence at the Gibson Hotel in Dublin. Photograph: Rogue

A few weeks ago Minister for Arts Jimmy Deenihan launched an artist’s residency at the Gibson Hotel in Dublin. There’s little strange in that, but the artist in question is Fin Dac, a street artist from Cork who uses stencils, freehand spray painting and other techniques to bring beauty to our urban areas.

The rubber-stamping of street art by an establishment formerly more concerned with painting over it goes some way towards acknowledging the artform as part of the mainstream. It has been a long time percolating, but graffiti and other outdoor work have transcended their subversive and often illegal origins in Ireland to become accepted.

These days you’re as likely to see an artist such as Maser earning critical and commercial clout by redesigning Brown Thomas’s shopping bag, or turning a defunct petrol forecourt in Limerick into an installation for the City of Culture, as you are a more “traditional” visual artist.

Edgier work
As the younger generation look for edgier pieces to hang on their walls, new-school entrepreneurs try to make their business shopfronts stand out, and brands aim to piggyback on cool design, the first port of call has become Irish street art. Irish work is maturing and growing in quality and scale. Individual artists have to perform a balancing act, as street artists become one-person design studios, flipping between commercial commissions, smaller-scale independent work, exhibitions and large-scale pieces.

“It’s a juggle between them all to make a living,” says the artist ADW. “The commercial work gives you the money to keep going. That’s what happened with me. My last exhibition was two years in the making, between dragging myself kicking and screaming to that point and getting enough work to put together.”

ADW’s exhibition Cut It Out , at FilmBase in Temple Bar last month, showcased his meticulous approach to stencil craft.

“The way I looked at commissions early on was, if I do a corporate commission and get paid, for another two months I have the luxury of not worrying about my finances. That will give me far more freedom than working in a bar.

“Then the effect on my work was not necessarily about the look and feel of my work but about my level of expertise. I don’t have any training. I didn’t go to art college. I don’t have a degree.”

Public approval
In 2006 the Bodytonic collective took over the Bernard Shaw pub in Dublin and let some of the city’s artists run riot on its walls. ADW says this was a key moment, when the art started to strike a chord with the passing public.

“Everyone saw the brightness that it could bring,” he says. “It was just immediate: that colour, and keeping it fresh and changing it every month, even though some of it is just on awnings.”

Another artist, Will St Leger, singles out scale as one of the biggest changes in Irish street art in recent years. Pieces are getting larger and more bold, from Maser’s colossal mural on the side of a Ballymun tower block to Conor Harrington’s stunning gable pieces or Joe Caslin’s ambitious Our Nation’s Sons portraiture project.

“It’s so loud, it’s so bold . . . That changed things an awful lot, because businesses look at that and go, ‘Wow, that piece is amazing,’ ” says St Leger. “Before, graffiti was mostly at ground level and often quite hidden away. Now it’s being lauded – and over flour floors.”

The mainstreaming of street art, particularly in the capital, has also created an economic opportunity for advertisers and businesses. A business wants something aesthetically pleasing on its external wall, as well as making some money, and suddenly there’s a merger of street art and commercial advertising.

“It’s a sort of double-edged sword, I think,” says ADW. When “people give up their properties to pieces of art to make a few quid, legitimate spots can be lost out to advertisement. Fair play to them – it’s nice to see money can be made from it – but it’s a bit of a shame that it’s being lost out to advertisements rather than artwork. If premises can make money out of their walls as well as their business, it’s a win-win for them.”

Kerryann Conway is the owner of Conway Communications, which works with brands such as Absolut to incorporate street art into their campaigns.

“It’s a mutually beneficial relationship, I think,” she says. “For artists it can bring their work to more mainstream audiences and provide them with a platform to showcase their talents to a much wider audience.

“The challenge for artists is to ensure that the brands they partner with are a good and credible association for them, and allow them freedom of creativity. Collaborations between brands and artists can work effectively only if it is a partnership in the truest sense of the word.”

Street art also continues to occupy a reactionary space where artists can articulate a speedy response to social and political events. The Anglo Tapes work along the quays in Dublin responds to a key moment in Ireland’s recession. Another Canvaz stencil reads: “Give a man an education and he will build a new world, but give a man a loan and you can own that man forever.”

St Leger’s Dublin Contemporary piece showed a sleeping bag with angel wings, a comment on the increasing homeless population. These interventions and individual pieces pop up much quicker than a contemporary novel or a reactionary piece of theatre ever could.

“The attitude and stance of graffiti in the past was an anti-establishment thing,” Dac says. “I’m definitely part of a new breed of street artists who paint a more familiar type of work; a more acceptable type of work, I guess. I don’t do social or political statements . . . Five-minute gimmicks have no interest for me.

“But also there are a lot of street artists who will say the whole scene is watered down. I don’t really care for that attitude . . . Street art can be beautiful. It doesn’t have to be political statements; it doesn’t have to have a macho tone.”

That macho tone is absent right now from the White Lady Art gallery, on Wellington Quay, where an all-female street-art exhibition is running until May 1st. Alexa MacDermot is the director of the space, which opened with an exhibition by Kathrina Rupit, aka Kin MX, in November 2012.

“This has been by far the best attended since that date,” MacDermot says. The works showing at the gallery come under the newly formed Minaw Collective (a riff on the Irish word for women).

“There’s a good space for female street artists” in Ireland, MacDermot says. “The girls were adamant to celebrate that women are around this scene, as opposed to in conflict with men in the scene.

“It was male-dominated initially, but as it’s become more mainstream and people are offering up their walls, which is a relatively new concept, there are more women around. You’re more likely to get a burly bloke spraying a train at midnight: that’s a risk thing, it’s a safety thing.”

As murals are staying up longer, the negative associations with the defacing of buildings or sloppy tagging are depleting. The quality and beauty of homegrown street art are improving, often characterised by a positive, uplifting or wry sentiment.

This improvement is almost solely driven by the artists. “I think that street art and street pieces are becoming the new cultural landmarks,” St Leger says. “It used to be, ‘Meet under Clerys’ clock,’ but people are starting to navigate the city around large, bold pieces of street art.”