Unthinkable: Philosophy's future is in safe hands judging by the Young Philosopher Awards 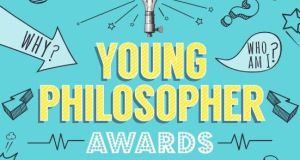 Now in their third year, the Irish Young Philosopher Awards took place online due to the pandemic, focusing specifically on moral themes relating to Covid-19

There comes a point in your life, if you’re lucky enough, when you realise your brain is like a tanker turning in the ocean compared with the jet ski minds of the new generation. That moment hit this correspondent when viewing the winning entries for the 2020 Irish Young Philosopher Awards.

Older people may be associated with wisdom but only someone of sufficient youthfulness would have the chutzpah to examine the ethics of the Covid-19 crisis through the medium of cardboard puppets.

And a highly effective tactic it was too in the hands of Emma Harris, a sixth year student from St Brigid’s College in Loughrea, Co Galway, who teased out the implications of lockdown consumerism in the dialectical style of Georg Wilhelm Friedrich Hegel.

“Wait, you were online shopping during the pandemic? Isn’t that kind of selfish – putting warehouse and delivery workers at risk just so you can have new clothes, or whatever,” says cut-out character Celia, in the role of Thesis.

“It’s not selfish. It’s self-care,” replies the Antithesis, John. “If we all thought that way the economy would collapse. Money needs to circulate. Me and my materialism are basically keeping the economy afloat. Hoarding your money is the truly selfish act.”

The dialogue plays out in a short video that was joint winner in the most innovative project category.

The awards, now in their third year, were forced to take place online due to the pandemic – and on a reduced scale, focusing specifically on moral themes relating to Covid-19.

One of the more eye-catching entries at primary level was from Tom Cox, a fifth classer from Glebe National School in Wicklow town whose project “What is a Hero?” interrogated the claim – uttered frequently during the crisis – that not all heroes wear capes.

Drawing on thinkers from Friedrich Nietzsche to psychologist Philip Zimbardo (I did say “fifth classer”, didn’t I?), Tom dialogues with his father in the mode of Herbert Marcuse or AJ Ayer tolerating interruptions from Bryan Magee in the classic BBC series Men of Ideas.

Highlighting the traditionally gendered conceptions of heroism, the schoolboy takes a counter-cultural approach – “I’d say a lot of people are heroes but the media doesn’t pick up on it” – before confidently asserting: “It all depends on history. Like, if you betrayed a king and get caught you’re a traitor. But if you betrayed a king and win, you’re like a great war hero.”

Channelling his inner Slavoj Zizek, the youngster even has something nice to say about Donald Trump: He is a hero to some people and “he has made a lot of people laugh”.

Top prize in the primary category, however, went to Sam Quinn O’Flaherty, a sixth class pupil at Gaelscoil Chnoc Liamhna in Dublin 16 who explored the dilemma “Who gets a ventilator when there are not enough?” This was done by contrasting medical guidelines with thinking from utilitarianism, nihilism, stoicism and hedonism.

“I am kind of a utilitarian,” the 12-year-old concludes, based on what he calls a combination of “rationality and emotion”. “I would feel sad about the others and would try to save everyone if I could.”

Utilitarianism – that ethical theory associated with securing the greatest good for the greatest number – also features in the project which took the overall prize. Lily McCann, a third year student at Temple Carrig in Greystones, Co Wicklow, composed a podcast on “What do we owe each other?”, taking listeners on a tour of moral thinkers from Immanuel Kant to Kwame Anthony Appiah.

Against the backdrop of the pandemic, she explores the implications of a famous thought experiment by Australian philosopher Peter Singer on the responsibility of bystanders to help others. Imagine you see a child drowning in a river but you refuse to wade in because it would spoil your new shoes. That would be morally reprehensible but, Singer asks, how does it differ from allowing a child die in the developing world for want of the cost of basic vaccinations – the price of a pair of shoes?

McCann finds Singer’s argument persuasive but resists other aspects of his utilitarianism – a philosophy which she believes “kind of forgets about people” in their uniqueness. Utilitarianism is “not about everyone; it’s about most people,” she notes.

“When discussing Peter Singer I was only really focusing on that specific theory and thought experiment,” she explains to Unthinkable. “My same criticism of utilitarianism still applies to Peter Singer. There are theories of his I don’t agree with but his specific beliefs of moral obligation to people living in extreme poverty I agree with.”

She describes doing philosophy as “an emotional rollercoaster”. Asked whether it strengthened or weakened moral certainty, she replies: “You’ll be reading a philosophical theory and start to agree with it but then either a thought experiment will be thrown at you or the philosopher’s beliefs will surprise you and you’ll change your opinion. So, yes, throughout this project my opinions on morality did change back and forth, probably every time I researched another theory.”

Dr Danielle Petherbridge, of UCD Centre for Ethics in Public Life, said there was a fantastic response to the awards considering this year’s exceptional circumstances, with about 180 entries, including – for the first time – some from Northern Ireland.

“This year has proven to us that there are so many reasons to keep this going and we will be back next year,” she stressed.

But the enterprise is about much more than prizes.

“Philosophy has always been one of my favourite parts about school in general,” says Lily McCann who is fortunate to have a teacher at Temple Carrig in Susan Andrews who has pioneered the subject there.

“After maths class for example I have always been grateful to have a class when there isn’t necessarily a right or a wrong. You don’t have to worry about memorising historical dates or novel quotes you learn how to think for yourself and question everything you thought you knew. These are skills I will use in everyday life and I will forever be grateful to have had that opportunity.”

You can find out more about the Irish Young Philosopher Awards, and see some of the projects, here