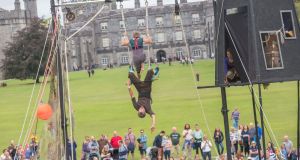 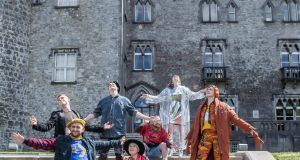 “When we think about craft, we think about hand-made,” Nora O Murchu told the crowd crammed into the National Design and Craft Gallery in Kilkenny on Sunday. She is the curator of an unmissable flagship show at the Kilkenny Arts Festival, the abruptly titled .OBJ, and was giving a fascinating free talk.

However, O Murchu initially had competition for the audience’s attention. That was her show’s most popular exhibit, Daniel Rozin’s Pom Pom Mirror, at the far end of the gallery, to which every person in the gallery rushed towards as if magnetised, and would not leave.

Not only do most people think of hand-made when they think of craft, the word “craft” has a particular relevance in the Marble City, where the famous Kilkenny Design Workshops opened in 1965. The .OBJ show was all about the intersection of digital technology with traditional methods of craft work - weaving, dressmaking, porcelain - and the ensuing disruption of expectations.

Azerbaijan, O Murchu explained, is famous for its traditional hand-woven woollen carpets. Artist Faiq Ahmed’s digitally-designed take on such a carpet hung on a wall in the gallery. It had been hand-woven in the traditional way. At either end, it looked like an ordinary carpet, and in the middle, the colours and shape pooled down the wall; as if it had become liquid in the centre and collapsed. It was a spectacular example of new and old forms of creativity.

The gallery held several other arresting pieces of work, but by far the most popular was Rozin’s interactive black and white Pom Pom Mirror. Working with sensors, the rug - composed of scores of fiendish, weird, furry moving parts - spun and revolved within a square frame in response to the movements of people in front of it. The result was eerie mirror images of body parts; distinctive and disturbing as crime-scene outlines.

There was also an extraordinary gaze-activated dress by Ying Gao, which is designed to light up and move wherever an observer’s eye alights on it. Alas, the audience had to settle for looking at a video of a model wearing the garment. The voltage that powers the dress is Canadian and not compatible with Irish voltage. In a show about technology and art, this was an unprogrammed and pertinent parable about the unreliability of technology.

In the afternoon, there was a full house in St Canice’s Cathedral to hear BBC presenter Evan Davis give the annual Hubert Butler lecture, on the theme of Post Truth. It was a masterclass in delivery; in an hour, Davis scarcely looked at his notes, but paced the stage in eloquent and thought-provoking soliloquy.

“Tribalism is the one area that will make people believe fake stuff. People park their rational selves to go with tribalism,” he said, drawing an analogy with why Americans had voted for Trump, and the British for Brexit. “Tribalism always gets in the way. Most public opinion is about judgement based on facts, rather than on facts themselves.”

On Sunday evening, the skies overhead the Castle Yard were the perfect dramatic backdrop for for Rough Magic’s new show, their version of Shakespeare’s A Midsummer Night’s Dream. The show was performed outdoors; actors running through and around the audience, in opposite banks of tiered seating. Its underlying theme of conflict in the form of electrical storms and a sound score of rumbling thunder had audiences looking upwards to the black sky, unsure if what they were hearing was real weather or part of the performance.

In a show without a set, Katie Davenport’s wonderfully brash, colourful and strikingly memorable costumes acted as a key visual link throughout. I don’t know if Shakespeare ever came across anyone from the People’s Republic of Cork, but once you hear Conor O’Riordan’s lines as Bottom delivered in a Cork accent, you just know this is what the Bard must have had in his head for that character all along.

On Monday morning, text messages circulated to those who had bought tickets for a classical music event in St Canice’s Cathedral that evening. The starting time of the concert was being moved back to facilitate the removal of a parishioner to the church. It was a reminder of the fact that many of Kilkenny’s festival venues, its gardens and courtyards and churches, are also working spaces within the community.

Next year, the flagship show of the 46th Kilkenny Arts Festival will be a three-way production between the festival, the Abbey Theatre and Asylum Productions of The Big Chapel. Thomas Kilroy’s seminal novel of life in a fictionalised version of Callan, Co Kilkenny, where he is from, will be the basis of a site-specific adaption from Asylum in Callan. As a precursor to what is being called The Big Chapel Project, on Monday morning, broadcaster Olivia O’Leary conducted a public interview with Kilroy at the Castle’s Parade Tower.

As a playwright of long-standing, O’Leary asked Kilroy to comment on the historic lack of visibility of women playwrights in Ireland.

Referring to the period of the1970s and 1980s, he observed that “There was no breaking of the iceberg in the male psyche towards women.”

In the question and answer session, an audience member with an American accent asked Kilroy to define the “Irish male psyche”, saying she didn’t know what it meant. A spontaneous laugh went up from the audience.

“We’re talking about generations of influence on the Irish male psyche,” he explained. “The church. Education. It all created a log jam,” he said. “It’s a question of undoing centuries of conditioning.” The iceberg, Kilroy said, “was now splintering apart.”

Throughout the festival, there is a twice-daily free “Secret Garden” strand in the city’s beautiful and historic civic spaces; the Castle Rose Garden, the Butler House Garden, Rothe House Garden, the Tholsel, and Heritage Council Garden. The participants in these events are not advertised in advance, so it’s a daily lucky dip of performance and music. However, once you know that these participants are quite often drawn from headline acts in the festival, you understand why local people turn up in consistently large crowds for each event.

Apart from being free, this strand of festival programming is truly inclusive to the community it serves. Every event I attended included audience members not usually associated with classical music or performance theatre; babies in buggies, scampering toddlers and dogs running off leash.

On Monday afternoon, Irish-born Christopher Ellis (20) brought his cello into the Butler House Garden. Formerly a student at the Royal Irish Academy of Music, he is now studying at the Paris Conservatorie with French cellist Marc Coppey. Unsuspecting tourists having tea in the Butler House outdoor cafe got a number of beautiful Bach pieces along with their scones.

An hour later, a frisson of excitement went around the Rothe House Garden when the audience camped out on the grass realised the person walking in with his violin was Johnny Gandelsman. Gandelsman, who includes a Grammy among his many achievements, was due to perform Bach’s violin sonatas in a major concert that evening.

Gandelsman gave a stirring 15 minute performance; a Bach taster of what audiences could expect later. The Irish Times sat on the lawn under an apple tree species named Blood of the Boyne, and can report that the A4 festival programme doubles as a very useful mat.

Stepping outside my hotel before breakfast on Tuesday morning, I spotted a half-dozen women in costume on Patrick Street; ball gowns in dark green, and scarlet and pale pink. The festival street performances were starting very early today, I thought, going over to have a look. They were not part of the Kilkenny Arts Festival. They were young women coming home from their debs.

The Kilkenny Arts Festival continues until the 19th of August. Kilkennyarts.ie