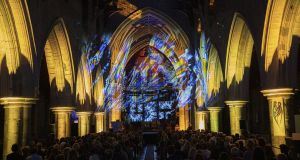 Flux, the brainchild of Eat My Noise, lighting up the interior of St Canice’s Cathedral. Photograph: John D Kelly

The Kilkenny Arts Festival is of place. Not just because the distinctive medieval city makes imaginative use of its spaces, but because they’re central to what it presents. So St Canice’s Cathedral on the hill is perfect for music or a lecture, but also for the immersive Flux. At the other end of the city’s “medieval mile” are talks in the castle’s parade tower and exhibitions in its National Design and Craft Gallery, mirrored by crafts and pottery on the Parade, and art from quilting to painting around every corner in ancillary events (not to mention AKA, Alternative Kilkenny Arts).

Sense of place crops up regularly, from workshops and talks to the cover image of the festival programme, of Daithi Magner’s disarming and playful “angel house” on legs.

In the rain, a cover band’s Brewing Up a Storm pours out of a pub near the Parade; how apposite, as disruptive elements featured over opening weekend. During Friday’s deluge, inside St Canice’s is a melding of music and maths and visuals, in Flux from Eat My Noise (composers David Duffy and Peter Power). The utterly immersive, imaginatively and technically impressive production involves 70 minutes of projections, live organ (John O’Brien), mesmeric video (David Mathúna), church bells and live Gregorian chant merging into electronics reverberating through the cathedral. The images and structure draw on mathematical concepts, including structural loops, fractals and the golden ratio, and the result is a hypnotic, atmospheric series of trippy riffs, occasionally disturbing, always beautiful. The church’s soaring arches are haunted, creating patterns with sound as well as rhythm in image, in a production utterly married to its location.

When Fergal Keane has to withdraw from the Hubert Butler Lecture, foreign correspondent Patrick Cockburn steps in with Behind Enemy Lies: Reporting on Conflict in the Age of Fake News, hosted by Olivia O’Leary, and drawing on a lifetime of front-line experience to explore the challenges of war reporting today. While propaganda has existed since the pharaohs, he says, what is new is “the sophistication and resources governments deploy in shaping news”. Fake stories to justify wars are later disproved “but not until they’ve had significant impact”.

For journalists on the ground, it’s difficult to ignore or discredit something seemingly newsworthy, plus “refuting a lie takes a lot longer than telling it, and requires resources and experience”, while governments’ ability to control news has increased. Also, sometimes things can be true – such as video from conflicts – but may also be “carefully selected fact, portraying one side in a positive light”.

While barriers to truth are “surmountable”, Cockburn depressingly cites a former AFP bureau chief summarising the challenges: the number of journalists has diminished, the dangers of reporting have increased, journalists have become targets, and they cost more.

Despite attempting positivity about truthful reportage, he paints a bleak picture of media giants soaking up advertising revenue that previously funded journalism while also reproducing news they haven’t paid to gather. “As media’s advertising income diminishes, its ability to effectively refute fake news gets less.”

So embedded in place is The Big Chapel X that it’s enveloped by the town of Callan for an adaptation of Tom Kilroy’s novel about a historic schism there. There’s palpable excitement at the preview, as we charge through the quiet town following “Blues” towards the “Reds” outpost. Involving about 150 local people, who merge with the “audience”, and seamlessly organised to immerse us in its story and its place, it sometimes has more humour than you might expect for such a serious subject. It’s also absorbing, threatening, moving, violent and edgy.

Growing up in Callan

Earlier, Thomas Kilroy speaks at the Parade Tower, with Patrick Mason drawing him on aspects of Over the Backyard Wall: A Memory Book, accompanied by Ingrid Craigie’s readings. Kilroy is looking forward to Big Chapel X, his first experience of promenade theatre, “the theatrical occupation of a space, and making that space part of the experience”.

They talk about his early life in his book, a mosaic of memory and history and fictions of growing up in Callan. Experiencing the Civil War and War of Independence through his parents’ memories was “a vivid way of receiving history” and is why “much of what I’ve written imaginatively has been based on historical record. I’m fascinated by the ‘what if’ of history – what if this happened instead of that? I’m also fascinated with gaps in the record, where it would appear the actual past has been lost to us, so imaginative recreation is a kind of burden on the writer, to repair the gap. I think this is certainly true of The Big Chapel. All historical fiction is but another way of retrieving the past, very much connected to memory.”

Recalling the town’s place in the 17th-century Cromwellian campaign, Craigie reads a section evolving from “the memory of the child that I was, ‘playing at Cromwell’ on the Fair Green in Callan”, watching a fictionalised Cromwellian battle, trying to “supplement memory”.

Kilroy recalls, colourfully, his time as a scholarship boarder at St Kieran’s College in Kilkenny, “an extraordinary institution in my time, a full statement of the confidence of church in its element”. The teenage boys were taught to ballroom dance with each other by “ecclesiastical tutors who were excellent dancers, no doubt. There was an extraordinary confluence of feeling in that room, most of it inexpressible.” Being “first senior”, there was “a lesson in the nature of power over others. I must have been insufferable.”

Violinist Patrick Rafter is another local hero, back in his hometown playing the sold-out St John’s Priory alongside pianist Michael McHale, for an elegant musical afternoon. It includes César Franck’s Sonata in A, composed as a wedding present for violinist Eugène Ysaÿe (Rafter also plays his Sonata No 3). Ysaÿe had to play it immediately for his guests, as McHale – just days before his own wedding – recounts; he jokes they have invited no composers for fear of a repeat demand.

The St Kieran’s College Quad envelops the set for the festival’s other big outdoor theatrical, Rough Magic’s hoot of Much Ado about Nothing. Torrential rain and lightning halted the preview and cancelled the opening night – a first for the festival. Set in an Irish mobile-home campsite, the cast cavort, fall in and out of doorways and roll around the ground in summer kecks, so when the rain comes lashing again on Saturday and the cast carry on regardless, plastic-hoodied audience willing them on, it becomes a kind of triumph, a spirit-of-the-Blitz experience for all present that is recalled and marvelled over for days.

Outdoor Shakespeare’s move from Castleyard to St Kieran’s offers better staging and audience facilities, says new festival director Olga Barry. She talks about creating a “stretchiness” around the edges of the festival’s “pillar strengths, of, for example, classical music and outdoor Shakespeare”, and “going beyond music to celebrate Kilkenny’s iconic buildings and using light to celebrate those places which might bring them closer to us, emotionally, as citizens.”

The light and dark she seeks is both literal and emotional, not shying away from “harder things” (such as Rough Magic’s other show, Fergal McElherron’s Cleft), but mixing light and dark, for example in Pictures at an Exhibition or the Arvo Pärt programme, and even tonight’s Light up the Castle, an outdoor light show with a Dance Macabre “track”.

There’s more light and dark in Genevieve Hulme-Beaman’s rehearsed reading of work-in-progress Rat King. In the tiny theatre at the back of Cleere’s, match playing on telly out front, she’s a small powerhouse of writer and performer, telling a tale both humorous and dark, from the perspective of a child. Engaging, intriguing and disturbing.

Place is central too in a discussion about the Butler Gallery’s impending move across the river from the castle to Evan’s House. The restoration/new build, years in gestation, and paused by the recession, is about to bloom on a site that was previously a barracks and a monastery, and most recently an asylum. Its new life will encompass its past lives, as well as a gallery for the Butler’s significant, hitherto unseen collections (for the festival, the Butler hosts Amy Cutler’s fabulous drawings). The stimulating discussion of the meaning and past of the space, and the approach in its reinvention, serve to whet the appetite for its March opening, and multiple future uses, echoing Barry’s aspiration to work differently with spaces, celebrating rather than working against ancient buildings, “which can hold and carry new work in a vibrant way, without conflict”.

The festival continues with Ciarán Hinds as narrator and devil in Fews Ensemble’s The Solder’s Tale by Stravinsky, conductor/contralto Nathalie Stutzmann in St Canice’s on Thursday; plus castle lights and the (hopefully) drier version of Much Ado all week.

Colum McCann on Israel-Palestine: ‘I was completely ignorant of what was going on’
10