Old Favourites: The Art of the Novel by Milan Kundera, translated by Linda Asher (1986) 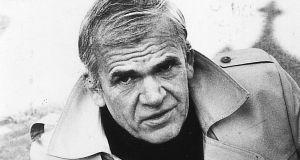 Milan Kundera: “A novel that does not uncover a hitherto unknown segment of existence is immoral.” Photograph: Aaron Manheimer

In the great novels of Milan Kundera’s middle period – The Book of Laughter and Forgetting, The Unbearable Lightness of Being, and Immortality – fiction and playful philosophical reflection merge in a form of marvellous elegance and compression; a uniquely novelistic kind of essay unfurls in counterpoint to narrative. With these books, something new happened in literature. The best part is that Kundera’s avant-garde genius precluded neither popularity nor readability. He mastered a modernist reboot of the novel with none of the aristocratic disdain for the reader cultivated by high modernists earlier in the 20th century. I’ve known people who hardly read any fiction but devour Kundera.

The first of his non-fiction books, The Art of the Novel is a seven-part essay that is “no theoretical statement at all” but rather “a practitioner’s confession” – a guide to Kundera’s conception of the history of the novel as it is embodied in his own work.

By the novel, Kundera specifically means the European novel, beginning with Cervantes and Rabelais and encompassing all those practitioners who have carried forth the spirit of this art form, which to Kundera is the spirit of the Modern Era itself. Kundera’s avid Europhilia is especially stirring now that the integrity of Europe is imperilled once again. He wants us to realise that over some five centuries, a treasure without equal has been cultivated here – and what a loss it will be if we allow it to disintegrate.

Fittingly, Kundera is a stern defender of the “great European art” he practised: “A novel that does not uncover a hitherto unknown segment of existence is immoral. Knowledge is the novel’s only morality.” He celebrates the novel’s spirit of complexity, irony and moral ambiguity, and calls for an art of “radical divestment” – that is, for novelists to pare away as much superfluity as possible and “always head straight for the heart of things”. Fellow practitioners could do worse than to write by Kundera’s core maxim: “The novel’s sole raison d’être is to say what only the novel can say.”