James Joyce and me

It’s Bloomsday tomorrow, and if you haven’t read Ulysses you should give James Joyce’s masterpiece a go. It can be pure entertainment 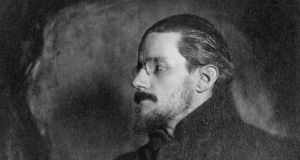 Genius: James Joyce around 1918, while he was writing Ulysses. Photograph: C Ruf/Archive Photos/Getty 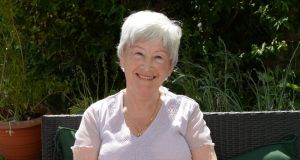 Not long ago, while visiting my son in San Francisco, I noticed that the toilet paper in his bathroom bore the legend: “Do you suffer from bathroom anxiety over not having the right tissue?” I could not help but remember the torn-up newspaper we used instead of tissue long ago. For some reason I thought of the Calypso chapter in Ulysses, in which Leopold Bloom sits on the throne in his outhouse, reading his “toilet tissue ” – an old copy of Tit-Bits.

I first tried to read Ulysses in 1958, when I was 15. I could not afford to buy the book, and of course it was still unavailable in the library. So I took myself to Eason, where I was able to read it surreptitiously.

The first chapter was grand: three lads hanging out in the Martello tower in Sandycove. The second was also to my liking. I enjoyed Stephen Dedalus’s journey to Dalkey and his dialogue with the teacher Mr Deasy, that dyed-in-the-wool Orangeman, who was trying to have his article on (of all things) foot-and-mouth disease published.

I rejoiced when Stephen managed to extract his money from Deasy – money earned from teaching Latin to young boys – and headed off with his coins.

The third chapter was more difficult. I could not make head or tail of it, being unfamiliar with the angst and with the stream of consciousness. There were far too many words I hadn’t yet come across. So that was that. I got on with my life.

Fast-forward many years to Klear Adult Education Centre, in Kilbarrack, where I joined Anne McGrath’s class “Reading Ulysses”. They were reading the chapter called Hades, about Paddy Dignam’s funeral. It was pure entertainment. I was hooked.

I subsequently attended St Patrick’s College in Drumcondra as a mature student and found Tom Halpin’s lectures on Ulysses to be memorable. I took over McGrath’s class when she retired, and I have now read Ulysses many times, encouraging those of my generation who had been nervous of taking it on.

I believe we Dubliners have a special affinity with Ulysses. Many people come from abroad to gain a flavour of the book – indeed, Joyce is responsible for a huge amount of literary tourism, particularly around Bloomsday, which this year falls tomorrow.

But people from Japan, Germany, France and elsewhere don’t necessarily understand all the nuances of our language. It is said they sometimes interpret “chizzlers”, which we understand as a pet word for children, as “people who work with wood” – and there are many attempts to translate “chainies”, which we remember as the pieces of delph dug up in gardens and used as toys in our childhood. These are just two examples of the language that we Dubliners have a special handle on.

My appetite for Joyce does not wane. I rejoice in the fact that people in Dublin are now reclaiming Ulysses as their own. We have the James Joyce Centre, on North Great George’s Street, and the unique Sweny Chemist – now a museum – on Lincoln Place, immortalised as the place where Leopold Bloom bought his lemon soap.

Every time I visit a reading is going on, and a book is thrust into my hand as a welcome. They might be reading Ulysses, A Portrait of the Artist as a Young Man, Dubliners or even Finnegans Wake.

I have read with pleasure everything I can get my hands on about Joyce. Declan Kiberd, the professor of Anglo-Irish literature at University College Dublin, and Terence Killeen, the Joyce scholar (and former Irish Times journalist), have a wonderful clarity on the subject, and are very easy to understand. I have also read Brenda Maddox’s biography of Nora Barnacle, Joyce’s wife, and Lucia Joyce, Carol Loeb Schloss’s book about their troubled daughter.

I particularly enjoyed John Stanislaus Joyce, John Wyse Jackson and Peter Costello’s book about Joyce’s father. I am deep in a book by Pádraic and Mary Colum, Our Friend James Joyce, which gives an insight into his life in Paris. And there are many more for me to read – if I live long enough.

I have even been to Buffalo, in New York state, whose university houses the Joyce Collection, the biggest museum of Joyce memorabilia. I reverently held an ivory stick that he often used when dressing for concerts when he lived in Paris.

But back to Leopold Bloom in his outhouse.

“He kicked open the crazy door of the jakes. Better be careful not to get these trousers dirty for the funeral. He went in, bowing his head under the low lintel. Leaving the door ajar, amid the stench of mouldy limewash and stale cobwebs he undid his braces. Before sitting down he peered through a chink up at the nextdoor window. The king was in his countinghouse. Nobody.”

We can visualise him sitting there, in comfort. He is reading an article in Tit-Bits by a Mr Beaufoy, and he envies the fact that this mediocre piece of writing, which “begins and ends morally”, has netted its author the princely sum of £3 13s 6d.

Meanwhile, Joyce’s work of genius Dubliners – a gift to the Irish people, each story polished and perfected, an epiphany in every one – lay unpublished for 10 years while arguments against its publication went on and on.

It is no surprise that Beaufoy’s story was chosen by Joyce as being admirable toilet tissue – and we may be assured that there was no “bathroom anxiety” whatsoever as far as Leopold was concerned.

50 scary films to watch at Halloween
10