Is a swathe of poppies at the Tower of London the best way to remember Irish war dead? 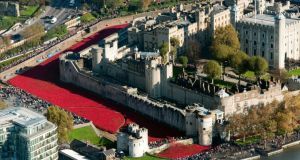 ‘The poppy display has been praised for the simple but powerful manner in which it has remembered the dead, but not everybody is satisfied.’ Above, an aerial view of visitors looking at the Tower of London’s “Blood swept Lands and Seas of Red” poppy installation. Photograph: Hannah McKl/EPA

How should the dead of the first World War be remembered? How can you convey, not just the horrors of that desperate conflict, but the sense of a whole generation being slaughtered? It’s a challenge a massive poppy display at the Tower of London has risen to – although not everyone agrees.

It is difficult, if not impossible, for us to comprehend the loss of so many millions of lives, some 16 million in total, including 10 million combat dead, in the space of just four years.

The first World War was a catastrophe even in victory for the British Empire which included, lest we forget, Ireland.

The Empire was left broke and irredeemably weakened, but worse still was the loss of life, almost exclusively male and between the ages of 18 and 45, some 888,246 in total. In short the British Empire lost more men on an average day in the first World War (650) than it did in the entire 13 years in Afghanistan (453).

Artist Paul Cummins created the ceramic poppy installation at the Tower of London named ‘Blood Swept Lands and Seas of Red’ that conveys the true magnitude of that awful war. The poppies were first laid in the moat surrounding the tower on July 17th and each day more are added until the 888,246th poppy will be added on Armistice Day. The display will then be sold off for charity. The ceramic poppies are already sold out.

This simple yet powerful blood red symbolic tide has captured the imagination of the British public. Queues of an hour exiting from the nearest Tube station were common last week. Crowd control has become an issue.

The display has been praised for the simple but powerful manner in which it has remembered the dead, but not everybody is satisfied.

The Guardian art critic Jonathan Jones has said that the display is too sanitised to convey the horrors of that war. It is “a deeply aestheticised, prettified and toothless war memorial”. It reflected, he believed, the “inward-looking mood that lets UKIP thrive”.

He suggested that an alternative should be “gory, vile and terrible to see. The moat of the Tower should be filled with barbed wire and bones”.

Jones’s view spectacularly misses the point. It is not how they died that is being conveyed, but the numbers involved. As the set designer Tom Piper suggested, an art critic should know the value of subtlety in getting a message across. “The one thing I have learned from theatre design is not to illustrate a play with the obvious”.

How should we remember our own first World War dead? Regrettably, the poppy still remains a divisive symbol in Ireland.

The best way to remember the Irish war dead is by remembering them all. Though the British and Commonwealth dead have been counted to the last man, we still do not know 100 years on, how many Irish war dead there are. The figure is likely to between 30,000 and 40,000 and all are represented in the display at the Tower of London.

It is to be welcomed that the Government has now sought to correct the deeply flawed and incomplete Irish National War Memorial Records (INWMR) which were compiled in 1922.

Bursaries are being provided to update the records, but much work has already been done in this field most notably by the former Irish Times journalist Kevin Myers who made a detailed study of the records in the late 1970s.

It is abundantly clear from work done by local historians such as Tom Burnell and Brian Scanlon in Sligo that the number of dead broken down county by county are a gross underestimate. The bursaries should complement and not duplicate the work already being done in the field.

The biggest legacy that the Government could leave to the Irish war dead is to ensure that by 2018 when the centenary of the armistice comes around, that we know, to the best of our ability, how many from this country died in the first World War.

If the artist offends, should we pluck out their work?
4