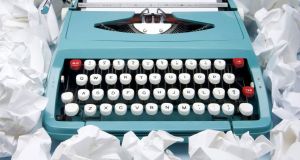 It is difficult to believe a noted curmudgeon such as Patrick Kavanagh could produce the tender, joyous even, sonnet Canal Bank Walk. It is proof, were it needed, that being up close and personal with death can shake up even the most hardened soul. Kavanagh had a brush with lung cancer but lived to write the words Leafy-with-love banks and the green waters of the canal/

Pouring redemption for me, that I do/

The will of God, wallow in the habitual, the banal. . .Wonderful.

As are those other lines which flow beneath: – “O unworn world enrapture me, encapture me in a web/

Of fabulous grass and eternal voices by a beech,/

Feed the gaping need of my senses, give me ad lib/

To pray unselfconsciously with overflowing speech

He is, of course, writing about Dublin’s Grand Canal. He is commemorated there (where there is water, canal water, preferably) at Baggot Street Bridge. But he might as easily be writing about the Royal Canal on Dublin’s northside, also so stilly

Greeny at the heart of summer. With the odd swan going by head low with many apologies.

However. This is territory of Kavanagh’s great rival Brendan Behan who wrote the Auld Triangle about his days in nearby Mountjoy jail. A hungry feeling came o’er me stealing and the mice were squealing in my prison cell/ And the Auld Triangle went jingle jangle all along the banks of the royal canal.

The animosity between the two was not helped by Behan’s comment that Kavanagh’s flat on Pembroke Road in Dublin was the only place in Dublin where, “you had to wipe your feet after leaving!”

Both are commemorated by statues alongside their respective canals. It is doubtful whether either would be pleased to know that both their statues were made by the same sculptor, John Coll. Even in death such tenuous connection would cause them great dis-ease.

But today, let us doff the hat in Behan’s direction in honour of the Royal Canal which celebrates its 200 anniversary. To mark the event a plaque commemorating the bicentenary will be unveiled this afternoon at Richmond Harbour, Co Longford, followed by music, talks and exhibitions.