How Music Works: how to get ahead in music publishing

Niall Byrne talks to Irish people who make a living in the music industry. This week, Charlene Hegarty of Derry label Smalltown America, offers a few lessons in the importance of tenacity and initiative 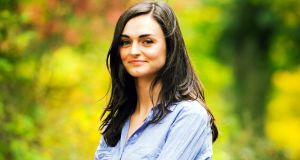 There's an impressive forthrightness to Charlene Hegarty, who works as a publisher with the Derry label Smalltown America. As she recounts her path to her current job in the music industry, that dogged determination is a constant throughout.

Undeterred by an early lack of knowledge, the Maghera native threw herself into the music business. Her mother thought she would become a vet, but Hegarty had made up her mind. She did a Performing Arts with Music Business course in Bangor Tech and was unfazed by her lack of musical skill,which was required for the course. She sang backing vocals and played tambourine to get through the performance aspect, and overcompensated by putting all her energies into the music business modules where she learned about tour management, live sound mixing and more.

After college, a conversation between her mother, who worked in a café, and a local in Mahera was overheard by a guy drinking coffee who ran a music PR firm called Schism from her hometown. He offered her a job as an office runner.

“At that point, they had exclusive contracts with Epitaph and Anti Records for all of Ireland,” says Hegarty. “As well as Curb Records, with country artists like Gretchen Peters and Hal Ketchum. I started at the right time, working 50 hours a week for £50 a week and Mike, who was working there, was on his way out and so he trained me. Within 12 months, my first campaign, I was given was the Tom Waits' Real Gone release. He had one interview he was willing to do, and I was on the phone to Dave Fanning and Tony Clayton-Lea about it – media royalty to me – and they were asking for different things. That was my baptism of fire.”

That opportunity lead to work as a tour manager for Fighting With Wire. The tour was sponsored by Kerrang! and Hegarty saw her opportunity and swooped in.

“I had no idea how to make it work but I knew I would find a way,”  she says. “It was a no-money-type venture but I realised I knew how to do it. I was able to demonstrate that I could make them money and I was able to get paid, through merchandise and other things”.

Seeing another opportunity through the band's label Smalltown America, then a one-man operation run by Andrew Ferris, Hegarty made a proposition.

“I wrote Andrew a letter and said, 'I don't know what it is you do, but I'll learn faster than everybody else, and until then I can go to the post office and do all the things that take up your time'. He gave me a job making the same amount of money as you'd get from the dole and that was it.”

The power of publishing
Four years later, Hegarty set up the publishing division of the label in Belfast, after seeing the potential for growth in the area.

“If a record label puts 10 grand into promoting an album and it gets radio play, the only way they can make money from that is if people are buying a CD,” Hegarty explains. “People are listening to music but they're not always buying it, so publishing is winning in a sense because you can still get royalties through those radio plays.”

The signing of Icelandic band Feldberg in 2010 proved that her decision to go into publishing made sense and pointed a way forward for her career.

“They sold very few records, but they got a good few commercial radio plays on RTE Radio One, and for that, it marked a change in my thinking. I thought I had more natural abilities towards more mass market / consumable music.”

Determined to make a go of it, Hegarty tried every avenue to learn about publishing.

“I went to panels and talks like Hard Working Class Heroes and Belfast Music Week, who brought publishers and music supervisors in from the States. I would buy them lunch and pick their brains for 30 minutes. I read every book.”

Local start
Hegarty started locally with film producers and directors, offering to supply music for their projects for the same budget, but to do all the hard work for them. She began to grow her contact list in the US from two people to a hundred and stayed in contact regularly, letting them know what her artists were up to.

“I've always said, it's not about knowing lots of people, It's about knowing people really well,” says Hegarty.  “In music synchronisation, there are hundreds of people doing it; you can't know everyone, but if you know people really well, they will refer you to someone else. In LA, the supervisors are all on the same strip and going to the same place after work. Word gets around.”

These days, the Smalltown America publishing roster is run separate from the label, yet collaboratively. About 50 per cent of the artists on the publishing side are from within the 32 counties, with the rest sourced internationally. Deals are split 50/50 and up in the band's favour. Most of Charlene's work is office-based and administrative. She deals more with brands and advertisers than with bands or labels.

Recent work includes the bespoke composition on a kids' TV programme called Puffin Rock, animated by Cartoon Saloon and currently showing on Netflix, and ads for Vodafone and Toyota.

“Most of our money comes from sync,” says Hegarty, referring to the placement of music on ads, film, TV, games or online. “They tend to be quite lucrative. Second to that are royalties that you get off the back end. The royalties on a TV campaign with high repetition eclipse the upfront money, even if the upfront is 50 grand. Also, you can earn £60 every play on a major radio station and if you're on a playlist, that can add up. For online, it's less of an income.”

Smalltown America is now 14 years old and both its label and publishing work off the shared mantra that “good music needs to be heard”. Charlene Hegarty's tenacity suggests that on the publishing side that will continue and her counsel for others to follow is one that's clearly worked in making the music industry her career: “Make mistakes really quickly and learn from them.”