How absurd: the world as Albert Camus saw it

The writer, always his own man, refused to take sides on Algeria and was an anti-Soviet leftist even though it led to a rupture with fellow intellectual Sartre 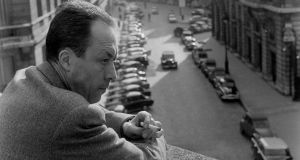 French author and philosopher Albert Camus (1913-1960) on a terrace outside his Paris office in 1957. Photograph: Loomis Dean/Time & Life Pictures/Getty Images

That Camus became one of the finest writers of the 20th century and a Nobel laureate is something of a miracle. The writer was born 100 years ago, on November 7th, in a remote corner of colonial Algeria, where his father was employed as a labourer in a vineyard. When the first World War started, Lucien Camus joined a Zouave infantry regiment. He was killed weeks later, at the Battle of the Marne.

Camus’s mother, Catherine, the daughter of Spanish immigrants, was half-deaf and suffered from a speech impediment. She cleaned houses to support her two sons. The family kept the piece of shrapnel that killed Lucien in a biscuit tin in their two-room flat in Belcourt, a working-class district of Algiers. The flat had no bathroom, heat or plumbing.

His brother worked full time as an errand boy from the age of 14. The same fate would have befallen Albert if his teacher, Louis Germain, had not persuaded Camus’s grandmother to let him try for a scholarship to the lycée. Germain gave Camus two hours of private lessons daily, free of charge. In December 1957 Camus dedicated his Nobel Prize acceptance speech to his former teacher.

Despite extreme hardship, Camus remembered his childhood fondly. “I was born poor and without religion, under a happy sky, feeling harmony, not hostility, in nature. I began not by feeling torn, but in plenitude,” he wrote in 1948.

Camus recounted his childhood in an unfinished autobiographical novel The First Man, which remained unpublished for 34 years after his death in 1960. “For you who could never read this book,” was the handwritten dedication to his illiterate mother.

Three-point plan
Camus planned his oeuvre in three successive stages: the Absurd; Revolt, which he saw as salvation from the Absurd; and Love. Shortly before his death, he said he had completed only a third of his oeuvre. Though he had written extensively on the Absurd and Revolt, he barely broached the subject of Love. The First Man, a moving paean to his silent, long-suffering mother, is all we know of what Camus would have written of love.

In his male friendships, Camus seemed to search for the father he never knew. On the advice of his philosophy professor in Algiers, Jean Grenier, he briefly joined the Algerian communist party. He was expelled after a year, and his subsequent membership of the French communist party lasted scarcely longer. “I’m not cut out for politics, because I’m incapable of wanting or accepting the death of the adversary,” he wrote later.

Yet Camus is often described as the moral conscience of his generation. He never forgot his Spanish blood, and was a lifelong opponent of Franco’s dictatorship. During the second World War, he joined the Combat Resistance group, whose newspaper he edited in Paris.

Camus was one of the first western intellectuals to condemn the American bombing of Hiroshima. In a Combat editorial published on August 8th, 1945, he wrote of “the terrifying perspectives opened up to humanity”. He campaigned against capital punishment. The Nobel committee praised Camus’s “important literary production, which with clear-sighted earnestness illuminates the problems of the human conscience in our times”.

Diagnosed with TB
Camus was diagnosed with tuberculosis at the age of 17, and was heart-broken at having to give up his position as goalkeeper on the University of Algiers football team. He suffered relapses of TB throughout his life.

Camus’s lifelong passion for the theatre began in 1936, when he founded the Théâtre du Travail in Algiers. Two of his four long-term mistresses, Maria Casares and Catherine Sellers, later acted in his plays in Paris. Asked why he wrote and directed theatre, Camus answered: “Simply because a theatre stage is one of the places in the world where I am happy . . . Through the theatre, I escape from what bores me in my profession as a writer.”

In his novels, plays and essays, he struggled to find meaning in meaninglessness. Though he showed lust for life and a Mediterranean oneness with nature, happiness was an unrelenting quest. “Heroism is accessible,” he wrote. “Happiness is more difficult.”

In 1943, Camus met Jean-Paul Sartre and Simone de Beauvoir at a rehearsal of Sartre’s play, The Flies. From the Café de Flore in Saint-Germain-des-Prés, the three dominated French intellectual life for the following decade.

In his 1951 book The Rebel, Camus denounced the totalitarianism of the Soviet bloc. Sartre was a pro-Soviet communist who labelled anti-communists “dogs”. Sartre commissioned an underling to write a scathing review of The Rebel in Les Temps modernes, the influential magazine he edited. Camus protested in a letter to “Monsieur le Directeur”, to which Sartre replied with his own 19-page epistle. Their rupture was complete. In her 1954 book The Mandarins, de Beauvoir maligned Camus as a repugnant character and collaborationist.

Camus had always maintained that he did not adhere to existentialism, the philosophy invented by Sartre. Asked later if he was a left-wing intellectual, he replied, “I’m not sure of being an intellectual. As for the rest, I am for the left, despite myself and despite the left.”

Also in 1954, Camus’s wife Francine, who suffered terribly from his infidelities, attempted suicide by jumping from a window. In The Fall, perhaps Camus’s finest novel, Jean-Baptiste Clamence, a lawyer who has specialised in defending noble causes, recounts his life during a night-time stroll through Amsterdam, whose concentric canals recall the circles of Dante’s hell. Clamence/Camus admits he cannot pass a pretty woman in the street without turning to look at her. He is haunted by the memory of a woman who threw herself from a bridge in Paris, whom he did not try to save.

Algerian politics
During the 1954-1962 Algerian war, Camus refused to chose between the Algerian Arabs, whose rights he had often defended, and his own people, the European pieds noirs.

His calls for non-violence and a federal Algeria where they would live in peace angered both sides. After his Nobel Prize ceremony in Sweden, he was accosted by a young Algerian to whom he said, in a fit of pique, “I believe in justice, but I will defend my mother before justice”. The quote was misinterpreted as support for l’Algérie française.

With his Nobel Prize money, Camus bought a house in Lourmarin, Provence, which reminded him of Algeria. On December 28th, 1959, he wrote to his former professor, Jean Grenier that “working conditions for me have always been those of the monastic life: solitude and frugality. Except for frugality, they are contrary to my nature, so much so that work is a violence I do to myself.”

It swerved off the road and crashed into a tree. Camus was killed instantly. Gallimard died five days later. Camus’s unused train ticket was found in his coat pocket. As he had often told friends, to die in a car crash was the height of the Absurd.

The three Absurds: Camus’s great works
Camus defined the absurd as the absence of answers to man’s questions about his own condition. “I draw from the Absurd three consequences,” he wrote, “my revolt, my liberty, my passion.”

Camus wrote The Stranger, Caligula and The Myth of Sisyphus (which he referred to as “the three Absurds”) concurrently in the late 1930s and early 1940s. They encompass the genres – fiction, theatre and essays – which comprise his oeuvre.

The Stranger has been translated into 50 languages, and is Camus’s best-known novel. In it Meursault, a Frenchman in colonial Algiers, is overwhelmed by sunlight on the beach and shoots an Arab. Meursault makes no attempt to explain himself, and jurors convict him more because he failed to weep at his mother’s funeral than because he killed an Arab.

Before his death, Mersault embraces “the benign indifference of the world” and hopes that many spectators will attend his execution “so that I will feel less alone”.

In Camus’s most oft-performed play, the Roman emperor Caligula sinks ever deeper into madness after the death of his sister and lover. The reason for Caligula’s unhappiness: “Men die and they are not happy.”

In The Myth of Sisyphus, Camus compares mankind to the Greek king condemned by the gods to eternally roll a boulder up the hill, only to have it fall to the bottom. Effort – not suicide – is the appropriate response to the Absurd. “One must believe that Sisyphus is happy,” Camus concludes.

Singer John Prine dies from coronavirus complications at 73
7 Out of sight, out of mind in the house of tragedy
8

Dancing with the Stars 2020: Final to take place tonight – Everything you need to know
Real news has value SUBSCRIBE