‘Blessed with the decibel levels of a foghorn, she bypassed the microphones and sang from the front of stage, to general acclaim’ 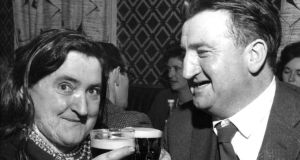 I never witnessed the phenomenon that was “street singer” Margaret Barry in action. She died in 1989, and her performing heyday had long passed by then. But I do know she visited my home town at least once, as she did most towns in Ireland, and that it marked a milestone in her career.

She mentioned it in an interview with this paper’s Irishman’s Diarist in 1959, while promoting another landmark event, her debut in Dublin’s Theatre Royal. Then, describing her early years, travelling from fair to fair with her banjo, she said: “I bought my first bicycle at Carrickmacross for 17 shillin’. When I made more money I got a better one.”

In fact, although born in Cork city in 1917, to a family of what would then have been called tinkers, Barry seems to have had enjoyed a special relationship with Ireland’s northeast. Her favourite ballad was The Turfman from Ardee, and she spent the last years of her life in Banbridge, Co Down.

Also, one of the most evocative descriptions of her I’ve read was from an edition of Breffni Blue, the Cavan GAA yearbook, some years ago. The writer, one Brendan Murray, remembered her performing at the fair in Shercock way back in 1946, and holding a crowd spellbound for two hours.

My favourite part of his story concerned the approach at one point of a local garda, who happened to be a Corkman, and who it was feared might move the crowd on. But either sensing an ethnic bond, or tipped off about the officer’s origins, Barry promptly launched into a ballad about emigrating from Cork.

After listening to which, and temporarily transported from his lonely exile in Ulster, the garda said “Good girl” and presented Barry with a half-crown – a staggering tip then, especially in Cavan.

It was in the northeast too – at a fair in Dundalk this time – that Barry was spotted by the great American folklorist and music collector Alan Lomax. Having already scoured his native country for its most authentic musical voices, recording them for posterity, he embarked in 1951 on a project to do the same throughout Europe and beyond, starting here.

And in Dundalk, his 500lb tape machine captured Barry’s performance of She Moved Through the Fair, an ultra-authentic version of the song, from a woman who had moved through more fairs than most.

It might be overstating it to say, as the Irishman’s Diarist did, that Barry was “discovered” by Lomax. She was doing well enough for herself beforehand, what with 17-shilling bicycles and all. But he certainly helped her to another level. From his base in London, he later summoned her to perform at the Royal Festival Hall, so that she went from entertaining mobile crowds at noisy Irish street fairs to a seated audience of 3,600, listening in reverent silence.

She also had to do this while missing her four front teeth. But undaunted, and being blessed with the decibel levels of a foghorn, she bypassed the microphones and sang from the front of stage, to general acclaim. After England, she went to America, also to great success. And from then on, she could afford not just better bicycles, but other trappings of fame, including dentures.

Barry was just one of countless singers recorded by Lomax, who in the process of preserving so many songs and voices that might otherwise have disappeared, became one of the most influential figures in 20th-century music.

He pointed the way for Bob Dylan, among others, and helped launch not just the folk music revival, but also that catch-all record shop category “world music”.

In fact, the project he began in 1951, the “World Library of Folk and Primitive Music” has since expanded to multiple volumes, countries, and continents. But collaborating with another great music collector, Seamus Ennis, Lomax paid Ireland the considerable compliment of being Volume 1.

The fruits of their combined labours have been called, in the title of Colm Sands’s BBC radio documentary, The First LP in Ireland. Along with Barry, it featured performances by Ennis, Elizabeth Cronin, Mickey Doherty and many others, and included one now almost extinct genre, the “keening” song. To subsequent generations of musicians, the collection has been almost a sacred text.

Margaret Barry’s exact date of birth is unrecorded – at least anywhere I’ve seen. Birthdays may have been excess baggage for Travellers of her era, anyway. But Alan Lomax, the man who first committed her to tape, was of course suitably well archived himself. He was born, in Austin, Texas, 100 years ago today.

Simon Cowell in surgery after breaking back falling off bike
2