The Times We Lived In: Gulliver travels to Dollymount Strand 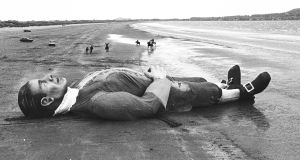 In the summer of 1988 hundreds of folks came to marvel at the 70-foot figure of Gulliver, who floated up the Liffey and was beached on Dollymount Strand - aka the land of Lilliput - as part of Dublin’s Millennium celebrations that year.

The image made the front page of all three Dublin newspapers - ours, the Indo and the Press - bringing to national attention a small but radically innovative street theatre company which had been founded two years earlier in Galway.

That company was, of course, Macnas, and within a decade its stately, colourful puppets would be instantly recognisable in Ireland and beyond.

In 1988, however, the fibreglass, aluminium and plywood Gulliver was a huge novelty. There’s a great RTE clip on the internet which shows a baby-faced Cathy Halloran, Lady Di hairstyle waving gently in the breeze, doing heroic work with a vox-pop. “Where did he come from?” she asks a group of kids. “From heaven,” one cherubic little girl replies.

Even the famously unhappy Jonathan Swift would surely have smiled at that one.

He might have been impressed by our photo, too. It records the gentle sweep of the wide and sandy strand, and was obviously taken either before the crowds arrived or after most people had departed. It captures the spirit of Gulliver’s Travels by emphasising the scale of the Lilliputians who’ve cycled up to check Gulliver out - there’s even a group of Yahoos on horseback, look.

OK, I know the Yahoos aren’t in Lilliput That’s why I didn’t use the word “houyhnhnm” about the horses. Though I wanted to: Swift’s silliness is immortal. Think of the struldbrugs, and the Bigendians.

Ah, Gulliver. Few arts spectacles have ever brought us down to size - or cheered us up - quite so effectively.

These and other Irish Times images can be purchased from: irishtimes.com/photosales. A book, The Times We Lived In, with more than 100 photographs and commentary by Arminta Wallace, published by Irish Times Books, is available from irishtimes.com and from bookshops, priced at €19.99.