The National Library: online and on the shelves

The National Library of Ireland houses a vast collection of Irish-related books, and plans to expand its web archive 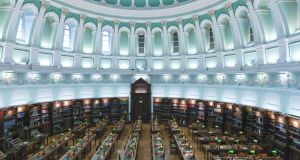 The Reading Room of the National Library of Ireland, whose printed material encompasses about one million books, hundreds of newspapers, thousands of periodicals and more than 150,000 maps, as well as official publications and printed music scores

With about 10 million objects from nearly 1,000 years of Irish history, archiving the internet isn’t the first thing that jumps to mind about the National Library of Ireland.

Nestled in the centre of Kildare Street since 1890, the Library’s treasured materials constitute the most comprehensive collection of Irish documentary material on the planet. But what of its future? If, say, our distant descendants wanted to research what life was like for us all way back in 2016 – say February’s general election, or even last year’s Marriage Equality referendum, with all their social media feeds in-tow – internet archives will likely be their default option.

“How we are collecting in the National Library is obviously changing, but it’s the same principles,” says Maria Ryan, a web archivist in the Digital Collections Department. “What newspapers were 20 years ago, websites are now. So we’ve recognised that need to collect and preserve that information for the people of Ireland, but in an ever-evolving form.”

Since 2011, the department has amassed more than 1,000 websites that are either Irish, or of Irish interest, working in partnership with the Internet Memory Foundation in Paris. Staff select those websites for the foundation, to later receive copies back from Paris that are then put on the Library’s website. And even if those source sites become defunct – as many have over the last five years – the Library will always have a permanent record available.

But as the Library’s ultimate goal is to digitise its collection – much of which is currently on microfilm – could it become a victim of its success, whereby would-be visitors go online instead?

“That’s a really big question that libraries, galleries and museums are all facing at the moment,” says library director Sandra Collins. “But, no, we are not concerned, as we saw earlier this year how we had digitised all our 1916 collections and put them online but we’ve so far seen more visitors than ever coming through the door. For many people, their first port of call is online, so if you don’t have a presence there people cut you out of the equation.”

In what Collins describes as the “most exciting thing that has happened to the library in many decades”, last November a badly-needed €10m renovation for the stately Victorian building was announced by Minister for Arts, Heritage and the Gaeltacht, Heather Humphreys.

News of the capital development came as a relief for staff after seven years of recession-fuelled cuts for the library, which had its budget shrunk by more than 40 per cent, from almost €12 million in 2008 to less than €7 million, resulting in the loss of almost a quarter of the staff.

Damp, drafts, temperature and humidity were affecting centuries-old artefacts for decades, putting their safe-keeping at risk, but the investment also recognised the need to increase capacity – the library’s Achilles’ heel for more than 120 years. It’s hoped the renovation will be complete by 2020, while keeping all the library’s services running in the interim. 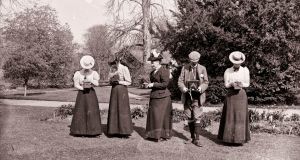 “But we also want to enhance the public spaces for everyone who comes through the door. We have the idea that within five years we may be able to raise our visitor numbers from about a quarter of a million to over half a million – if we can open up the space,” says Collins.

Overseas precedents were explored, including the British Library in London (the largest library in the world, with about 170 million items), the famed Bodleian Library in Oxford and the Hive in Worcester. The result? Wifi across the board, working rooms to facilitate research groups (and not just the solo, “shh-ing” researcher) and a more digital-friendly zone where visitors can work their own devices as they wish.

“The National Library and the National Museum were established by the Dublin Science & Art Museum Act of 1877,” says Gerry Long, library historian and its special collections librarian. “The foundation collection was that of the Royal Dublin Society, which was next door in Leinster House at that stage, up until 1890.

“We are constantly adding to the material. Since 1927, the library is legally entitled to all books published in Ireland, but we also purchase books from overseas - anything of Irish interest or by an Irish author.”

But Long stresses that any potential acquisition must also adhere to strict criteria deriving from what value, however small, the item might add to the State. Assuming it passes the yardstick, then anyone – Irish citizen or otherwise – is welcome to donate items. At the philanthropist end of the spectrum, Long cites an Irish-American named Steve Griffin, who has been donating to the library for the last 20 years – about 6,000 books to date, documenting the Irish involvement in the US from its civil war onwards.

But what goes around comes around: for the diaspora searching for their Irish roots, the library is so often their first meaningful, face-to-face interaction with anyone in the country. “You get a lot of them coming off the planes and coming straight in here jet-lagged,” says John O’Connell, who joined the library in 1979. “When I worked in genealogy I always enjoyed hearing all their stories.”

O’Connell says that over the years he’s seen everyone from film stars and writers to ordinary people coming into the library research their family roots. Yet genealogy has changed so much with the internet.

“There is no doubt that in the past someone would have had to physically come into the library to view the records, but now they can do it from the comfort of their own home.

“But all those years in genealogy, you get some very sad stories. People may be looking for a father or grandmother or whatever, and you’re always very sensitive to them. You listen and then give them advice on how best to go about it.”

Pages and pages: what’s inside the national library, and what it means

The Library’s printed material encompasses about one million books, hundreds of newspapers, thousands of periodicals and more than 150,000 maps, not forgetting tomes of official publications and printed music scores.

Its lavish main public building abuts the Dáil and contains the stunning Reading Room, along with the Genealogy Advisory Service; the main exhibition area is in the basement. Just a few doors down, on 2-3 Kildare Street, sits the library’s Department of Manuscripts and the Office of the Chief Herald, while its Photographic Archive is located in Temple Bar’s Meeting House Square.

“There is an intrinsic value in capturing what it means to be Irish, how it has changed over time and what it means for the future of our country. I fully understand the need to commercialise and see a return on investment, but what will really last is what our arts, culture and heritage mean to be Irish.

“That meaning was here before recessions and banking crises and it will be here afterwards, as long as we maintain a commitment to it. I think for the Irish, it’s our heart and our soul: this is our record of our place in the world.”

“There are some things that can’t be monetarised and cultural institutions and records of the imagination are examples of that. The National Library is the institution that collects the records of the Irish at home and abroad. That’s our role, and a very important one at that. I think people appreciate that.”