The Joseph Mary Plunkett papers: ‘I was never meant to be so happy’

The youngest of the Proclamation signatories married his fiancee, Grace Gifford, in his prison cell the night before he was executed

The National Library of Ireland’s digitised archive on the 1916 signatories reveals Joseph Plunkett to be a witty man, a great traveller, a poet and a romantic to the end. Video: Bryan O'Brien 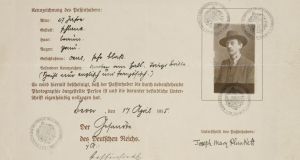 Joseph Mary Plunkett: his German passport shows him almost skeletal, with a clear lump on his neck. Photograph courtesy National Library of Ireland

Joseph Mary Plunkett married his fiancee, Grace Gifford, in his prison cell on May 4th, 1916, the night before he was executed. He was 28, the youngest of the seven signatories to the Proclamation to die.

Many know of this poignant event from the popular song Grace: “Oh Grace, just hold me in your arms and let this moment linger / They’ll take me out at dawn and I will die / With all my love I place this wedding ring upon your finger / There won’t be time to share our love for we must say goodbye.”

The papers relating to Plunkett that the National Library of Ireland has just released show that he never expected to be able to marry.

On the last day of the Rising – or the “6th day of the Irish Republic”, as Plunkett described it – he left a letter for Grace in the ruins of a house on Moore Street. “This is just a little note to say I love you and to tell you that I did everything I could to arrange for us to meet and get married, but that it was impossible.”

He wrote the letter “somewhere in Moore Street” about “midday”, which says a lot about the chaotic circumstances. “We will meet soon”, Plunkett adds, probably more in hope than in expectation. 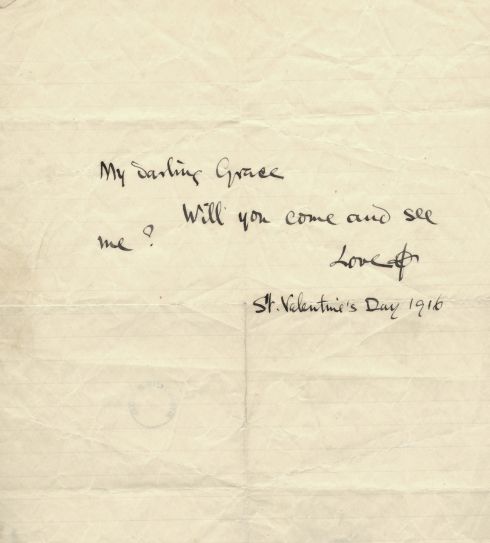 The love affairs between the Gifford sisters, Grace and Muriel, and two of the seven signatories, Plunkett and Thomas Mac Donagh, are one of the great subplots of the Rising. Mac Donagh was a married man with two children when the Rising took place. His wife, Muriel, would drown in an accident a year after the Rising; Grace Plunkett joined the anti-Treaty side in the Civil War and died in 1955.

When she accepted, Plunkett was joyous. “Since yesterday everything is different . . . You know what my sort of love is. It is a poor thing beside the splendours of your heart. But such as it is you have. I do love you . . . By the way, I am actually a beggar. I have no income and am earning nothing.”

First she was received into the Catholic Church, an event that prompted Plunkett to write a poem to her: “Your burning heart now spreads its wings / In the wild beauty of your love.”

His protestations of poverty were at odds with his upbringing, which was wealthy by the standards of the time. His father, Count George Plunkett, would go on to be a leading figure in Sinn Féin. Plunkett attended Stonyhurst College, a Jesuit school in England for well-to-do Catholics.

Although weak and frail in boarding school, he could be roused to righteous anger. He wrote to his parents: “I had a fight with a big boy about twice my weight. His name was Quin. He had been kicking the football at me (which hurts) up in the field where there was no one to see fair play. He thought he could do what he liked, so he came over and called me a liar. Then I went for him. He hit me on the chest, so I gave him three for myself.”

Plunkett was plagued by ill health for most of his short adult life. The National Library has an extraordinary photograph of Plunkett in Germany in 1915. He had made an arduous and dangerous journey from Ireland to raise an Irish brigade among German prisoners of war and to organise shipments of arms for the Irish Volunteers. He failed at the former but was successful at the latter.

His German passport shows an almost skeletal figure with a notable lump on the side of his neck, a result of glandular tuberculosis.

A few weeks before the Rising he had to have an operation on his glands. He didn’t live long enough to learn whether the operation had been a success.

Caoilinn Hughes: ‘The patriarch is still at large’ in Irish society
9