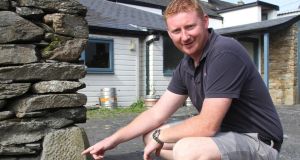 Adrian Herlihy of Day’s Bar on Inishbofin with a 16h century decorated stone believed to be from a “lost” O’Malley castle. Photograph: Marie Coyne 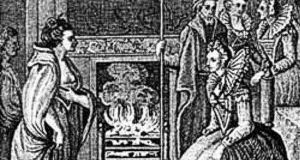 The meeting of Grace O’Malley (left) and Queen Elizabeth I (a later illustration from Anthologia Hibernica, vol 11, 1793) 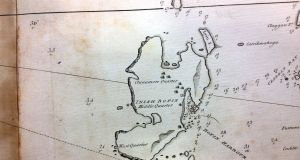 Maritime chart of Inishbofin island compiled by Murdoch McKenzie in 1776. It highlights the harbour and entrance but also records a lost castle above the existing church on the harbour which is very close to where the fragment of the castle doorway was located. The location is also shown as the site of a castle on the 19th century maps of the island. File photograph: Courtesy Royal Irish Academy

Traces of a “lost” castle once held by 16th-century sea queen Grace O’Malley have been located on Inishbofin off the Connemara coast.

Galway city heritage officer Dr Jim Higgins believes a decorated stone fragment holding together a boundary wall may have been part of an O’Malley castle which was marked on an 18th-century maritime chart of the island.

Grace O’Malley or Granuaile had a necklace of fortifications along the west coast in the 16th century, with the castle on Clare Island being the base for her maritime activities.

The O’Malleys had taken the island from the O’Flahertys in the 14th century, and it subsequently fell under the control of the Earl of Clanricarde.

There are references to at least one, and possibly two, castles held by the O’Malley clan on Inishbofin, but there had been few traces of them, according to Connemara archaeologist Michael Gibbons.

The fragment of a window was identified previously in an area known as Dún Gráinne – built opposite Port Island, where the star-shaped ruins of Cromwell’s barracks now stand.

It is said that Grace O’Malley and her ally Don Bosco – who may have had a fortress on Port Island before Cromwell – used to stretch a chain boom across the harbour to trap and loot ships with valuable cargo.

The doorway stone identified in the past week by Mr Gibbons and Dr Higgins is set within a century-old boundary wall of Day’s pub on Inishbofin.

“The family always believed it came from a castle previously built somewhere in this year,” says Adrian Herlihy, who runs Day’s bar with his wife, Orla.

Mr Gibbons says the doorway stone may have come from a castle marked on a maritime chart of the island compiled by Murdoch McKenzie in 1776.

“The location is also shown as site of castle on the 19th-century maps of the island,” he says. “The castle was removed during 19th-century improvements around the inner harbour which included the building of a new harbour and church.”

Mr Gibbons has also found fragments of medieval pottery from the Cromwell fort on Port Island, which points to an important late-medieval settlement.

“The island of Inishbofin was clearly of major military and economic importance over many years, none more so than during the later Middle Ages when the O’Malleys sided with the English and Grace was given an English pension for services rendered,” he says.