An Irishman’s Diary: Menacing depths lie behind the physical exterior 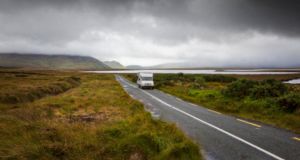 ‘As a writer, Walter Macken was attuned to the menacing depths that lay behind the physical exterior: the infertile bogland that makes farming problematic, the harsh character of the inhabitants, their callous treatment of one another, their superstitious religiosity and frustrated love affairs.’ Photograph: Getty Images

Recently, when returning from a family break in Renvyle House, on the drive from Letterfrack to Galway, the raw beauty of the lakes framed by the imposing, brooding mountains brought to mind Walter Macken’s portrayal of the west.

As a writer, Macken was attuned to the menacing depths that lay behind the physical exterior: the infertile bogland that makes farming problematic, the harsh character of the inhabitants, their callous treatment of one another, their superstitious religiosity and frustrated love affairs. I read most of Macken’s novels as a teenager and enjoyed them enormously. It is a shame that there is little or no critical attention now paid to someone who had such a successful career as a novelist, playwright, actor and director. Even the publication by his son Ultan of a biography, Walter Macken: Dreams on Paper, by Mercier Press in 2009, has not inspired scholars to engage with his work in a serious manner. Perhaps the archive of An Taidhbhearc theatre at the James Hardiman Library in NUI Galway may draw attention to the seminal work he carried out at this important artistic venue.

His talent as an actor can be gauged by the fact that following his performance in the MJ Molloy play, The King of Friday’s Men, during a tour of the United States in 1951, a Hollywood studio offered Macken a seven-year contract on a salary of $40,000 a year. He declined, offering the excuse that he wanted to complete his fourth novel, The Bogman. It would have been a shame if Macken’s undoubted talent as a story-teller were left unrealised. He was especially perceptive, if not a trifle unkind, when it came to depicting the foibles of the inhabitants of Connemara, who form the basis of what I consider his best novels – Quench the Moon (1948), The Bogman (1952), Sunset on the Window Panes (1954), and Brown Lord of the Mountain (1967). These and other works by Macken were published by Macmillan house in London.

Some of the correspondence reproduced in the biography shows that Macken’s editors at Macmillan were not afraid to reject work that they considered inferior. This happened with the autobiographical novel, Cockle and Mustard, of which they wrote: “It is possible that . . . you may have hurried the writing, but, whatever the reason, the book has not the depth or the emotional quality of which your other work has shown you to be capable”. It was never subsequently published.

Macken, a devout Catholic, was crestfallen when some of his work fell foul of the Censorship Board. Quench the Moon, his first novel, was banned, probably as a result of describing the pregnancy outside of marriage of Kathleen Finnerty, Stephen O’Riordan’s sweetheart. Other issues dealt with include incarceration in an industrial school (the fate of Cahal Kinsella in The Bogman), loveless marriages, unbridled violence, blind lusting after land and material possessions, social and religious alienation. Throughout, Connemara is presented as a malevolent force. Stephen’s friend and arch-poacher Michilin makes the following observation in Quench the Moon: “That’s one of the troubles about Connemara, too. It must be the strong air of it or something. It weeds you out. If you can stand up to it you’re all right, but sometimes it mows men down like oats in front of a scythe”. Cahal Kinsella is never fully accepted by the local community when he returns home to work on his grandfather’s farm. His refusal to conform to local customs and traditions result in his ostracisation. Cahal marvels at his neighbours’ ability to justify their treatment of him: “What better way to do it than to say that God had smitten the unjust? They could be pious about that. They could go into the churches and thank god for his munificent mercy that He had reached out from heaven and punished the sinners in their midst”.

There is a sense in which Macken’s characters are casualties of their environment. For example, a priest muses on the harm done to a former parishioner for whom he secured a position in Connemara: “I did her a great disservice by putting her out in this wilderness, like planting an orchid in the middle of the Sahara”.

The harsh realism that characterises Macken’s fiction may not sit easily with those who are enthralled by Connemara’s undoubted charms. However, life in this western outpost was undoubtedly demanding for those exposed on a daily basis to its less savoury aspects. Macken knew the people and the surroundings he was depicting intimately and this is what gives his writing its particular resonance.