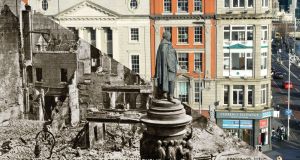 A new statistical picture of life in Ireland in 1916 shows just how much can change in a century.

If you lived in the time of the Easter Rising, your name was far more likely to be John or Mary and if you managed to avoid the prospect of death in childhood, you would probably succumb by the age of 53 with a good chance of bronchitis or tuberculosis being the cause.

It was a world in which children as young as three were sent to industrial schools while families squeezed into almost 24,000 one-room tenements in Dublin alone.

Society was bereft of variety, in food, movement and places of birth; it was an unsurprisingly homogeneous world.

The statistical mirror of Ireland a century ago is the product of arduous research conducted by the Central Statistics Office (CSO) as its contribution to centenary celebrations.

Much of the data, published on Wednesday, is based on the 1911 census and other material as closely applicable to 1916 as possible.

The compendium of history, titled Life in 1916 Ireland: Stories from Statistics is available on the CSO website for anyone wishing to step back in time.

“Things were very poor back then so poverty jumps out at you, the lack of variety. From some simple things like names, people felt they could only use certain names for their babies,” explained Helen Cahill, the lead statistician on the project.

“We have average prices of groceries that people bought. There was very little variety in food.”

Half of the workforce was in agriculture compared with a paltry 5 per cent in modern Ireland while 10 per cent of people were employed in domestic service.

If you were born 100 years ago the most popular names for boys were, in order, John, Patrick and James, compared with Jack, James and Daniel in 2014.

For girls, the trend was Mary, Bridget and Margaret compared with Emily, Sophie and Emma.

The same census material shows that in 1911, just 0.7 per cent of people here were born outside the UK and Ireland, compared with 11.2 per cent today.

In 1916, more than 8,000 children lived in industrial schools, and some reformatory schools, although the numbers admitted that year were the lowest in some time (1,001).

“The infant mortality rates were just phenomenally high and in Dublin in particular they were sky high,” explained Ms Cahill.

With the decline of church influence, marriage statistics have also changed. In 1916, 92 per cent of 15,207 unions were in Catholic churches, compared with a little under 60 per cent in 2014. Conversely, 28 per cent of marriages were civil ceremonies in 2014. That figure was less than 1 per cent a century ago.