Into the west, on enchanted horsepower

An Irishman’s Diary about an odyssey by e-bike 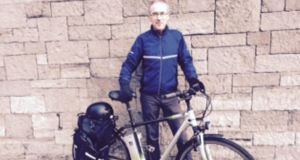 “The effect of an e-bike is to harness a small, localised gale for your personal use. Every time you turn the pedals, there’s a whoosh, as if an invisible hand has pushed you. When you’ve built momentum, you don’t notice so much. But you notice when pulling away from traffic lights, and on hills, and when you’re careering past other cyclists like a 1999-model Lance Armstrong.”

It was still summer when a company called Greenaer, hearing of my experiments in car-free living, suggested a test-drive on one of their electric bicycles. At the time I was sceptical. Half the point of cycling was exercise, I thought. No pain no gain, and all that.

But when I finally got around to trying their bike, last Sunday, it was November. Temperatures had dropped to single figures, overnight, and it was windy. That would take care of the pain, I knew, as I mounted the German-made Kalkhoff Agattu i8, with 36-volt battery, and headed west.

The first rule of being a cyclist is that, regardless of its official direction, the wind is always against you. And on Sunday, although it was officially from the southwest – 10 o’clock the way I faced – it would be hostile all day.

But the effect of an e-bike is to harness a small, localised gale for your personal use. Every time you turn the pedals, there’s a whoosh, as if an invisible hand has pushed you. When you’ve built momentum, you don’t notice so much. But you notice when pulling away from traffic lights, and on hills, and when you’re careering past other cyclists like a 1999-model Lance Armstrong.

The effect is exhilarating. I was in Maynooth in about an hour and, 75 minutes later, Kinnegad. On the downside, I had lost all feeling in my toes. Also, underlining Greenaer’s point that e-bikes are compatible with exercise, I was experiencing the uncomfortable combination of being simultaneously cold and sweaty.

But a crazy dream was beginning to form, which involved me having fish and chips in McDonagh’s of Galway by evening, and getting the train home. I cursed the 90 minutes of precious daylight frittered away before leaving Dublin. Even so, a coast-to-coast transit seemed possible. I had packed a change of clothes as insurance against rain. But in Kinnegad, instead of changing socks, I put the second pair on top of the first and sped on. And I had just sped through Milltownpass when I learned the hard way something the lads in the shop had probably tried to explain in the briefing.

The bike they gave me was for distance, primarily, not speed. In theory, it had a battery life of 180 kilometres. But that was with optimum usage – careful gear-choice, “eco” power setting, etc. I, however, had been tearing along, full throttle, as if there was no tomorrow. Now, after 45 miles, the battery was dead.

I felt like Cinderella, post-midnight. My magical carriage had turned back into a bike. But it was too early for lunch yet. So I ploughed ahead, on human power, noticing for the first time how many hills there are in the midlands. A while later, somewhat less exhilarated, I limped into Tyrellspass, where the battery and I stopped for a feed.

The battery was a slow eater. When I finished lunch, it was still showing only one of its five lights. So aiming for two, I left it plugged in at the village hotel while I watched the second half of the Manchester derby in a pub. And by the time United had their chips, I knew I wouldn’t be having mine – not in McDonagh’s anyway. The Galway dream had died.

Still, I was back on the old western road, and after years of bypassing it, that was a voyage of rediscovery. Powered up again, I breezed through towns and villages that were like forgotten friends. Is it yerself, Kilbeggan? Looking good, Horseleap! Well, as I live and breathe – Moate!

Athlone was now the target, and in the fading daylight even that was a challenge. The bike was well lit, but I knew that car headlights made cycling after dark impossible. So I again ramped the power to maximum and pedalled hard until the Athlone suburbs where, with merciful timing, the battery died again.

On the train home, I was tired. But it was nothing like the tiredness an 80-mile cycle should involve. Other, intimate details impressed too. I remembered an old English bicycle company called BSA, which stood for Birmingham Small Arms (it was also a munitions manufacturer), but was widely translated as “Bloody Sore Arse”.

Well, the BSA quotient of the Kalkhoff was surprisingly low, thanks to the ultra-comfortable suspension you get with €2,450 worth of German engineering. Despite which lack of friction, Flann O’Brien’s laws of molecular interchange had somehow taken effect. The e-bike and I had bonded. It was with some regret I gave it back.