An Irishman’s Diary: Christmas in a caravan 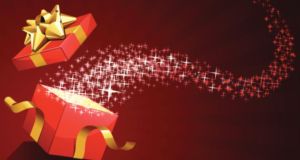 ‘Each Christmas when their children were young, we minded the Christmas presents until they were smuggled back to the site under cover of darkness on Christmas Eve. It is not possible to hide Christmas toys in a Traveller caravan.’ Photograph: Getty Images

The box room had fallen out of use since the children left one by one and then almost before we noticed it, the grandchildren started coming on sleep-overs. “Grandchildren keep you young,” people said. I am not entirely convinced of that! Anyway, I had to repaint the box room to please one of them – I was happy to do it, he is so good and beautiful and he loved the colour we chose. Blue. “Just like the Dublin hurling team, Daideo.”

A few weeks ago the room was full, the grandchildren were in awe. The brilliantly white wedding dress with its flounces and flaring underskirts took up most of the room. The beads dazzled under the light. Then there were the pink dresses for bridesmaids and flower girls. We ran out of hangers and hooks and just draped the dresses over the bed and prayed that nothing would happen to them during their stay in our house.

The story of those dresses really goes back to 1989 when I was a member of a group that campaigned for suitable accommodation for roadside Travellers. That was an arduous struggle against what seemed to be implacable opposition but eventually the local authority built a fully serviced five-bay site just a short distance from where I live. It felt good to live in an area that accepted Travellers.

There was joy and intense excitement on July 3rd, 1989 when the five families moved onto the new site. Early on the following morning, Independence Day, one of the mothers gave birth to Mary, her sixth child.

From the start she was like an omen, a ray of hope. She had a bright smile and dancing eyes. She was cheerful, and as she grew up she was full of talk and could read almost any book I gave her. Every time I saw her I thought I might not believe in God only for her.

We got to know the five families and many of their relations very well. They introduced me to their world. There was always something unpretentious about their conversation. I always relaxed in their company. Each Christmas when their children were young we minded the Christmas presents until they were smuggled back to the site under cover of darkness on Christmas Eve. It is not possible to hide Christmas toys in a Traveller caravan!

Mary married when she was 18 or 19. We minded her brilliantly white wedding dress with its flounces and flares and dazzling beads. The dresses for bridesmaids and flower girls were a beautiful daffodil yellow. That was another one of those times we ran out of hangers and hooks and just draped the dresses over
the bed and hoped for the best.

We were invited to the wedding in the heart of Co Wexford. Mary was cold and nervous and happy. Her mother hugged me and kissed me on both cheeks. I found that strangely moving.

Today the same families live on the site which has a homely and lived-in look about it. Some people would probably think it should be refurbished to bring it up to the standard of newer sites in the area. I don’t know. But as ever the people are friendly and welcoming. It is a real pleasure to know them, I am very lucky.

Mary, the young married woman, is still cheerful, smiling and beautiful. She helped bring the white dress and the pink ones I mentioned earlier down to our house for safe-keeping. She was aunt of the bride-to-be and the four chattering cousins who came with her – “to help” by the way. They filled the house with laughter. Before they left, one of them asked how long we were living in our house. Forty years. “Forty years?” And they left in a gale of laughter and disbelief.

Every time I hear a story that’s critical of Travellers I can think of positive stories like the one I’ve just told. There are many such stories. At Christmas we think of home, family and cosy firesides. I think
of all the Travelling People I know and I pray that they are safe?