50 years after jailbreak, Richard Behal (77) says all should be released to honour 1916 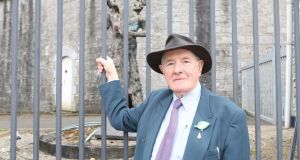 Richard Behal: jailed for an attack on a British naval ship in Waterford in 1965. Photograph: Liam Burke/Press 22

A former IRA prisoner, who escaped from Limerick Prison 50 years ago, has called for an amnesty for all political prisoners to mark the centenary of the 1916 Rising.

Richard Behal (77), a Sinn Féin candidate in the 1984 European elections who describes himself as an “independent republican”, made the suggestion in Limerick at the weekend where he marked the jubilee anniversary of his prison break.

He walked to Limerick Prison from Pery’s Hotel with Walter O’Dunphy (75), who was jailed along with him and the late Edward Kelly in connection with an attack on a British naval ship in Waterford in 1965.

The three men were given nine-month jail sentences following the attack, which caused thousands of pounds worth of damage to HMS Brave Border.

Some of the men who helped plan the prison break in February 1966, including Marcus Fogarty from Cashel in Co Tipperary, were among those who joined Behal outside Limerick Prison to mark the 50th anniversary of his escape.

The escape plan had been roughly agreed while Fogarty, who was released before the others, was in the prison serving a short spell for selling Easter lilies without a permit.

Messages were then communicated with visitors including members of Cumann na mBan who were briefed before they went to visit political prisoners.

On the night of the escape the then 27-year-old Behal used bed sheets and ropes which were thrown over the wall to scale the prison’s perimeter after rubbing his body in butter to squeeze through a space measuring 9 by 18.5 inches.

“If they had been captured or were gone and couldn’t throw over the ropes, I had extra bed sheets ready to use. And once I dressed myself, because I had to come out the window nude as there was no room for clothes and I had butter rubbed all over me in order to get through the space, I was ready to go.”

Having the reunion on the centenary of the 1916 Rising was “fitting” according to Behal, who in 1964 – two years before the 50th anniversary of the Rising – was involved in the disruptions of the visit by Princess Margaret and her husband Lord Snowdon to Ireland.

When asked about how Ireland’s is commemorating 1916 Behal said: “Don’t be talking about free Ireland if you have political prisoners. They should all have been amnestied or released if you really want to honour 1916 and the sacrifices of all the men and women.”

“It [the centenary] just demonstrates that despite all of the celebrations Ireland is still not free as she should be.”

Asked if amnesty should be given to all ‘political prisoners’ including those who have taken lives, he said you could not have “a struggle for freedom where lives are not lost”.

Olive: Olive branches for women in their 30s
7 Dublin drug baron's sentence marks end of an era for trafficking gangs
8

Shooting soldiers in a handball alley: Amelia Stein’s The Bloods
9 Fateful stroll to the castle grounds
10

‘My legs, stomach and solar plexus turned to jelly when Aretha Franklin started to sing’
Real news has value SUBSCRIBE