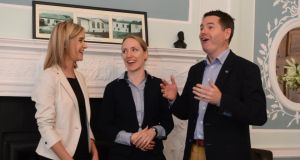 The first World War was regarded by contemporaries as a complete break with the past in terms of the forms of violence used, according to Heather Jones, associate professor in international history at the London School of Economics.

Speaking at the Parnell Summer School in Avondale, Co Wicklow, on the topic “Violent transgression and the First World War, 1914–1918”, she said that some of the battlefield violence on the western front such as the shooting of enemy prisoners and the use of gas was regarded as a breach of the norms of war as they had existed.

Prof Jones said the massacre of civilians in Belgium and France and the bombardment of British coastal towns was also regarded as a breach of the norms of war as was the mass internment of civilians deemed as enemy aliens. She said the war was regarded as so radical that it marked a complete break with the historical past, a rupture in history.

“The war thus was seen as having destroyed the ‘old’ civilisation – leaving a vacuum in which competing political and cultural visions of what the ‘new’ European civilisation might look like developed.

“Transgressive violence was in many quarters normalised as a result of the war: in other words, practices of battlefield fighting and of violence against civilians which might have been seen as culturally unacceptable – or dishonourable – as transgressive, before 1914, were now part of war planning.”

“This made the process much more fraught and helps to explain why the war lasted so long.”

In a lecture to commemorate the 1,000th anniversary of the Battle of Clontarf, Dagmar Ó Riain-Raedel of the department of history at University College Cork said the battle was essentially a revolt by the Leinstermen against the dominance of the Munstermen in which the Vikings played a minor role. She pointed out that for all its violence the Battle of Clontarf lasted one day, beginning at dawn and ending at sunset, which was a stark contrast with the first World War.

Hannah Gadsby: Douglas – Even her detractors will have to admit this is funny
7