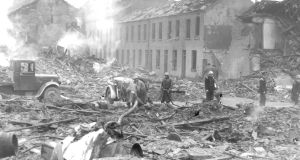 It is estimated that more than 1,000 people died during the Belfast Blitz. Photograph: Belfast Telegraph 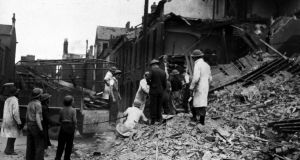 Historian Dr Brian Barton has called for a special memorial to be created on the grounds of City Hall featuring the names of those who died. Photograph: Belfast Telegraph 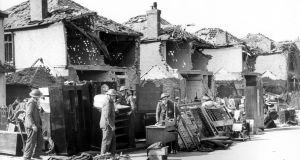 De Valera’s decision to accede to a Stormont request for assistance by sending up fire crews could have contributed to the German decision to bomb the North Strand in Dublin. Photograph: Belfast Telegraph

There is no doubt that a number of the German bombers that carried out raids on Northern Ireland 75 years ago, in which more than 1,000 people died, used the lights of Dublin to help guide them to their targets, a Belfast-based historian has stated.

Dr Brian Barton has also speculated that the Luftwaffe raid on the North Strand in Dublin, which also took place in 1941, may have been prompted by then taoiseach Éamon de Valera’s decision to send fire crews from the South to assist in dealing with the aftermath of the blitz.

On April 15th, 1941 up to 200 Luftwaffe bombers mounted a raid on Belfast in which more than 800 civilians were killed and 1,500 were injured, many of them seriously. German bombers attacked the city again on the night of May 4th-5th, killing 150 civilians.

It is estimated that 960 civilians were killed in the two attacks, with British military deaths bringing the fatality list to more than 1,000.

For decades now it has been part of unionist and loyalist lore that the then Fianna Fáil government was partly to blame for the Belfast Blitz due to a decision not to black out neutral Irish towns and cities at night.

Most cities in Europe were blacked out at night during the war. Dr Barton, however, said that notwithstanding that there were cowls over street lights in Dublin, the city lights were visible.

Nonetheless, he said, it was beyond doubt that some of the German bombers who attacked from up along the eastern Irish coast used the lights of Dublin as a guide to Belfast. He explained that some of the Luftwaffe planes would have approached from other directions as well.

“There is no doubt from the southern government’s own records that the Germans were able to use the lights along the coast as an aid to charting their routes towards Belfast,” he said.

Dr Barton, an Open University historian and author of The Blitz: Belfast in the War Years published by the Ulster Historical Foundation, said the fact that neutral Ireland did not black out Dublin at night was a bone of contention with the Stormont unionist government and Churchill’s British government.

It was argued that the lights provided a guide both for the attacks on Belfast and for attacks on British cities such as Liverpool, which was heavily bombed during the second World War.

“There is absolutely no question that that route was used. It is fully acknowledged in southern government records,” said Dr Barton.

He said that “the flow of aircraft from Wexford north along the coast” was tracked by the Southern authorities at the time of the Belfast attacks.

Dr Barton said that the decision of De Valera to accede to a Stormont request for assistance by sending up fire crews and tenders to help tackle the huge fires could have contributed to the German decision to bomb the North Strand in Dublin on May 31st, 1941; some 28 people were killed in that attack.

“There is some ground for that suggestion,” he said.

Dr Barton referred to how the head of the Luftwaffe Hermann Göring had been up to then anxious not to antagonise the Irish government.

“Whenever the Easter Tuesday attack took place on Belfast Göring had given clear and specific and concrete instructions to the Luftwaffe crews that they should take the greatest care not to bomb neutral Ireland, so that at all costs the bombing of neutral Ireland could be avoided,” he said.

“Yet we had the bombing of Dublin on May 21st. What had changed in the meantime? The one thing that had changed was the support Dublin gave to the North.”

He said, however, that this could not be stated with certainty as there were no German records to substantiate the argument.

“I would love to see a permanent memorial to the victims,” he said. “If City Hall doesn’t do it now in the 75th anniversary year, it will never be done.”

The Market was one of three sites which were used as temporary mortuaries; the others were the Falls and Peter’s Hill Baths, where plaques also are being erected.

Further plaques will be installed in the coming weeks at sites around Belfast where the greatest losses of life occurred.