Collections from museums, libraries, galleries, archives and theatres to be included 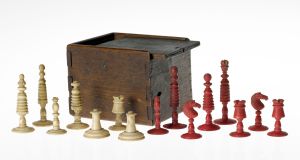 A chess set believed to have been used by Daniel O’Connell and Richard Lalor Sheil while imprisoned in Kilmainham in 1844.


Free global access to treasures contained in Ireland’s cultural institutions is to be provided in a project launched by Minister for Heritage Jimmy Deenihan in the United States yesterday.

Collections from the State’s museums, libraries, galleries, archives and theatres are to be available at inspiring-ireland.ie.

The ceremony was attended by John Hartnett of the Irish Technology Leadership Group (ITLG) and Dr Sandra Collins of the Digital Repository of Ireland. The project is supported by an international advisory board, led by Mr Hartnett, which will help with technology direction and commercialisation and encourage financial support from the US, with the aim of raising €15 million over a decade.

Mr Deenihan said Ireland’s cultural institutions held collections of great international significance. “They chart the story of Ireland, from pre-Christian and medieval times to the modern day,’’ he added.

“They also hold as part of their collections treasures of international importance across the globe.’’


Vision
His vision, he added, was that everyone would be able to access those treasures free and at one address. “Inspiring Ireland will also support the digitisation and preservation of Ireland’s cultural heritage for future generations, showcasing once again Ireland’s growing reputation as a centre for the innovative use of digital technology,’’ the Minister added.

Mr Deenihan said Mr Hartnett had done outstanding work in the US in his role as founder and president of the ITLG and in his ongoing involvement with the American Ireland Fund.

“He is uniquely qualified to assist the Government with this project,’’ he added.

Mr Hartnett said that as well as providing global access to Ireland’s cultural treasures, the project would bring the State’s history and heritage into the 21st century and open up its culture for creative minds.


Exhibitions
The project consists of three exhibitions containing over 100 fully searchable objects. It is envisaged that curators and experts will provide cultural interpretation of objects and exhibits. The digital platform has been developed by the DRI, a branch of the Royal Irish Academy and funding of €5 million by the Government mainly through a third-level scheme.