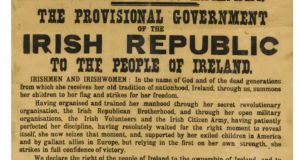 Only 50 copies of the Proclamation out of a print run of 1,000 are believed to have survived

Two weeks before centenary commemorations for the Easter Rising are set to begin, an original copy of the 1916 Proclamation is to be auctioned in London tomorrow.

Sotheby’s said the “most important document in the history of the Irish Nation” has a top estimate of £120,000 (€166,000) in an auction at the New Bond Street saleroom.

The unsigned copy being offered for sale was “acquired at the time of the Rising by a Dublin resident” and has not been on the market previously. It has been consigned to auction by a descendant of the original owner.

The document is one of an estimated 50 surviving copies of the 1,000 printed in Liberty Hall on Easter Sunday, 1916. Of these, some 25 are in museums and public libraries; the rest are in private ownership.

The outcome of the auction will be watched closely by auctioneers in Ireland, as several 1916- related auctions of historical memorabilia are planned for next year.

About six copies of the Proclamation have appeared at auction in the past decade and prices vary greatly depending on the quality and whether or not it is signed. Some copies were signed by the printers, Christopher Brady, Michael Molloy and Liam O’Brien, and some by the rebels.