Students bring up homelessness, immigration and technology in self-written documents

To celebrate Proclamation Day, students at St Columba's National School in North Strand, Dublin, raise a flag and create their own take on the Proclamation. Sonya Lennon's children, Finn and Evie, do the reading. Video: Roisin Ingle. 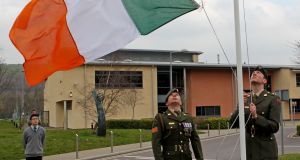 Schoolchildren from across Ireland have set out the issues they feel need to be tackled in modern Ireland – such as poverty, unemployment, crime and climate change – in a collection of self-written 2016 proclamations.

The children of St Joseph’s National School in Mell, Drogheda pointed out “much of what was written in the Proclamation in 1916 is still relevant today” but others making submissions to the scoilnet.ie website embraced issues which have come to shape 21st-century life.

“We believe that the happiness of the citizens of Ireland is essential,” the Mell children said in their proclamation, which was plotted on yellowed paper with old-fashioned typesetting. “Every person in Ireland has the right to feel happy and safe.”

The children of St Patrick’s Girls National School in Rathfarnham, Dublin, said: “We want to live in a place where no one is lonely and everyone can be friends.”

In Glantane National School in Mallow, Co Cork, the children “believe in an Irish Republic where everyone is entitled to a place they can call home. We see homelessness and hunger as a thing of the past. We wish Ireland to be a place where everyone is kind.

“We will welcome immigrants and returning emigrants and we want to ensure that just like the Celts, the Vikings, the Normans and Saxons of old, they will too become as Irish as the Irish themselves.”

Children from St Joseph’s National School in Portlaoise wrote that, in their world, technological and environmental change takes centre stage.

“Technology plays a huge role in our daily lives in the Ireland of 2016, affecting how we interact, in ways that our forefathers could never have imagined.

“It is our wish that computers will never be seen to replace conversation, community spirit and simple kindness.”

Irishtown National School in Claremorris, Co Mayo, pledged to “protect our environment, our flora and fauna, reduce pollution and become an eco-friendly nation”.

Pupils at Scoil Bhríde in Mullaghrafferty in Carrickmacross, Co Monaghan, noted the issue of emigration.

“There should be a junior Dáil for the new generation to express their hopes and ideas for the future of Ireland.”

Scoil Nioclas Naofa in Dunmore, Co Galway, stated that “every child should have a home to share with their family”. Pupils at SN Ard Cianain in Athlone, said they “believe all the children of this State are entitled to a full enriching education especially children with special needs.”