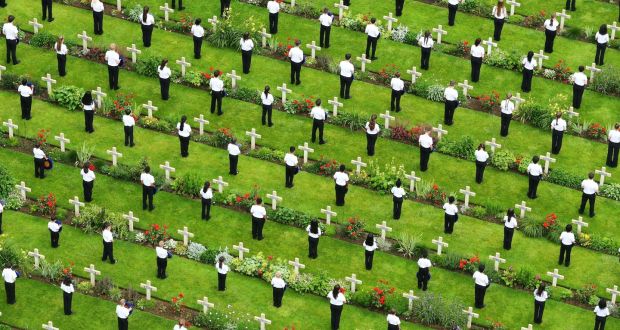 Young people lay wreaths during a service to mark the 100th anniversary of the start of the battle of the Somme at the Commonwealth War Graves Commission Memorial on July 1st, 2016 in Thiepval, France. Photograph: Gareth Fuller/Getty Images

“The days wore on, and we were tossed back and forth between sudden alarm and long hours of quiet when everything seemed just fine. Most of our artillery never showed up, and there was no point in opening fire anyway; the barrels had worn out with the heat, and our light guns didn’t have a long enough range. Some days we couldn’t see a thing through the icy fog.”

Urbain Martien, grew up in poverty in Ghent in Belgium, in a late 19th century world which was about to disappear. His father was a painter of frescoes, a fragile dreamer who lived the life of a Renaissance artist and remained almost oblivious to the hardship he and his family endured.

At 13 young Urbain was working in an iron foundry; it was tough, soul destroying work. He seemed prepared for anything, but even with his stoic demeanour, his robust Catholicism and a deep love of art, he was pushed to inhuman limits when serving in the trenches of the first World War.

Throughout his four years of hell broken only by periods spent convalescing after being wounded in action, he watched closely, transfixed by the relentless images. In old age he decided to write it all down.

It filled the pages of notebooks which near the end of his life he gave to his grandson, Stefan Hertmans, the son of his only child, Maria. Hertmans admits his reluctance to read the notebooks. It seems as if instinct warned him not only of the horrors he would discover, but also the crushing human personal grief.

His grandfather, a small correct little man, a copyist, who sustained his military bearing to the very end – he had after all trained to be a soldier – emerges not only as a hero but most importantly, as a witness, a truth teller.

Although he did receive many decorations, he was also an ordinary, unsung hero who spent his life grieving his lost love while sharing a passionless marriage of affection with her older sister.

Within days of Urbain joining the army in 1914, his mother walks about 60 miles to where he and his fellow soldiers are awaiting orders. She gives him a basket of sandwiches and fresh underwear as well as a figurine which he puts in his trouser pocket.

“It will remain there until the day a bullet bores through both the figurine and my thighbone” he writes. The wait is shattered by the sight of a Zeppelin “huge and unreal” in the sky above them. It “floats slowly past us… casting its shadow on our upturned faces... more impressive, more menacing than the battles I had imagined.”

It is presented as an “unearthly apparition” and takes the role of messenger, informing the soldiers of what it is to follow. In the distance loud thunder composed of man-made sounds is gathering momentum “and for the first time, our hearts stand still in shock and horror.”

Before this exciting, candid, at times verbose first-person narrative from the trenches begins, there is a slight problem. Part one proves a pedestrian affair in which Hertmans attempts to reconstruct the earlier life of his grandfather, whom he knew only as an old man.

The opening sequence is interesting, often touching but the methodology which also includes the author’s present day life intermingled with his boyhood memories and the more distant days of his grandfather’s youth, is dutiful, self conscious and somewhat tentative as the influence of the great W.G. Sebald occasionally overpowers the writing.

Admirers of Sebald may decide War and Turpentine is a pale imitation and look elsewhere. That would be a pity. Hertmans does lack the laconic tone of wry melancholy which Sebald mastered and his inspired translator Anthea Bell conveys so brilliantly.

Hertman’s prose is somewhat flat and toneless although David McKay’s translation soars in the superb descriptions of battle, the lulls and the frenzied onslaughts creating lasting images. Above all there is the personality of the soldier; Martien’s response is one of anger and fear mixed with hatred of the invisible enemy.

Yet there is also a sense of wonder as the world around him continues to change. As an artist he notes every detail, his visual sense shapes his understanding.

“These days, it is almost impossible to imagine the desolation of the landscape through which I marched with my eight new comrades from the third battalion of the 2nd Regiment of the Line.”

He describes watching “the faces of the sleeping soldiers glowing like copper in the soft light, with the warm hue you find in some Goya paintings... I quietly took my pad out of my knapsack and made a few quick sketches. That calmed me a little. Later, after the war, I used the head of one of the lads as the model for an oil painting of the head of Christ.”

Somehow, if obviously, through his visual life and response to physical detail, Urbain Martien retains his sense of self and it often seems as if he is speaking directly to his reader, such as in this episode early in the war: “To our surprise, about twenty Germans emerged from the woods on the far side of the pastures with their hands over their heads... In their grey uniforms, the spikes of their dreadful helmets gleaming, they approached with dreamlike slowness, grim and menacing even in surrender. They were the first Germans we’d seen up close.”

Living in anticipation of the deadly bullet or shell which could at any moment kill him, there is always the hunger and when a fine German horse appears from nowhere, useful maps attached to its saddle, it is slaughtered and quickly prepared for eating.

“Time rolls on into bland duration, duration loses direction, direction gives way to stasis and boredom, boredom makes us sluggish and apathetic, the days creep through our fingers. There are, in fact, whole weeks when nothing happens...”

There are occasional echoes of Erich Maria Remarque’s All Quiet on the Western Front, although Martien, at least through the conduit of his writer grandson, is practical, less fatalistic and his narrative never achieves, nor possibly does not even aspire to, the eerie beauty of Remarque’s classic. Yet there is in Hertmans’s book an astonishing moment which captures the surreal madness of war as reflected in, and by, nature itself:

“But what we saw the next morning staggered us all: a mass of dogs, cats, polecats, weasels, rats and rabbits, swimming across the river like an otherworldly army, their snouts just above water, trailing countless triangles in the smooth black surface.

“The locks had been opened in Nieuwpoort... We watched with pounding hearts. We had strict orders not to shoot at the fleeing animals, because that would betray our position. So we looked at on as those sharp-nosed messengers from a doomed world, fleeing an unimaginable Armageddon, came on land, shook the water out of their pelts and rushed past our trenches without a glance... Like disguised angels of judgment, the bedraggled ghosts passed out of sight again, bounding over the slick black fields of mud in the drab morning light.”

In June 1916, Martien is sent on a third mission, to an observation post, “a cowshed between the two lines. He is aware of the dangers, everyone else who has already been sent had been killed dead.

“I salute and say I’ll do whatever I’m told, but this is a fool’s errand. The commander snaps that I can expect to be punished if I happen to come back alive.” Just when he thinks he is safe, he is immediately shot in the back.

As the Somme rages he is in England, recovering, wondering how many of his comrades are dead. “More and more, in every conversation, I hear how disgusted everyone is with the absurd, meaningless carnage that drags on without cease; it is said that even the Germans have had enough and are deserting in droves.” The English woman at whose home Martien is recuperating asks if there are any young men left in Europe.

On his return to the front he knows he is to be reprimanded over a technicality; the army does not permit improvisation, even under fire. It marks an important moment for him and he recalls: “...I lost my will to fight that day – and what is worse, I lost my faith. The more human lives are sacrificed, the harder it is to bear the contempt of the French-speaking officers, the public humiliation they inflict on Flemish soldiers.”

War and Turpentine offers an insight into the daily life of a soldier at the Western Front, not only from an ordinary man’s point of view, and Martien was no random participant, although conscripted, he was trained having attended a military school.

It is also by a Belgian, a Fleming, who reveals the contemptuous snobbery of the French-speaking officers towards the working men from Flanders. Social hierarchy was carefully maintained not just by the British.

Widely praised throughout Europe and already translated into 20 languages, it is an important book because of the material from which it draws; as a novel, it is less convincing artistically because the book is suspended between the obvious power of the source material and the more detached, rather cold, less engaging literary aspirations of Hertmans the polemical novelist.

There are stylistic shortcomings, the prose is stiff and the sentiments earnest; the soldier is far more compelling than his grandson working his way through the notebooks, an impassioned concluding observation about war made by Hertmans could well consolidate this heartfelt book’s place in the literature of war:

“Something about the lost ethos of the old-time soldier is almost unthinkable to us today, in our world of terrorist attacks and virtual violence. The morality of violence has undergone a seismic shift. The generation of Belgian soldiers driven into the monstrous maw of the German machine in the first year of the war had been raised with exalted 19th-century values, with pride and honour and naïve idealism.

“Their military ethics were based on the virtues of courage, self-discipline, honour, the love of the daily march... They read aloud from books they had brought with them... All those old-fashioned virtues bit the dust in the trenches of the first World War. Soldiers were deliberately plied with alcohol before being driven into the firing line (this is one of the greatest taboos among patriotic historians, but my grandfather’s stories leave no room for doubt)... The atrocities and massacres changed the morals, the worldview, the mentality of that generation forever. The battlefield redolent of crushed grass, the soldiers who saluted even in their dying moments, the rural scenes of hills and glades in 18th-century military paintings gave way to a heap of psychological rubble choked with mustard gas... the physical annihilation of an old-fashioned breed of human being.”