An Irishman’s Diary about the Drummully Polyp 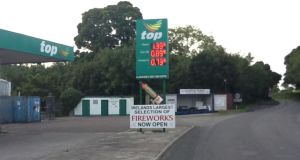 Fireworks, a commodity you still can’t buy legally in the peace-loving South.

Up around Fermanagh recently, I took a slight detour to drive through that world-class Border anomaly known, among other things, as the “Drummully Polyp”.

We can say it’s world class, I think, because a few years ago it was the subject of an epic discussion on a US blog called “Strange Maps”, the leading (and perhaps only) internet site devoted to the topic of cartographical eccentricity.

The consensus of a multinational army of anoraks who contributed to the discussion was that there may be even greater border oddities elsewhere – between India and Bangladesh, for example, or in the Tadjik/Uzbek/Kyrgyzstani triangle.

But it was generally agreed that, as idiosyncratic international frontiers go, the Drummully Polyp – also called the Drummully Salient and known locally as both “the Connons” and “Coleman’s Island” – is up there with the best.

Essentially, the polyp is a piece of Monaghan, and therefore of the Republic, almost completely surrounded by Fermanagh, and therefore the UK. It’s about seven miles long, north to south, and three miles across at its widest point.

The isthmus connecting it with the mainland Republic is much narrower, however. Usain Bolt could run from one side to the other and still have change out of a minute. Except that the running surface might be a problem, because there are no roads in this part of Drummully. The isthmus is crossed only by a river, the Finn, which elsewhere marks the county boundaries.

To find out how this oddity first arose, you might have to go back to the Middle Ages. The McMahon clan, whose family business later became Monaghan, could probably explain. Or failing that, the Maguires, whose farming and feuding interests were likewise rebranded as modern-day Fermanagh.

The 1921 division inherited those lines. And this may be when the term polyp gained currency as a description for Drummully. The word has a detached, scientific sound about it; although it was hardly designed to reassure the populations on either side.

In one of its meanings, a polyp is a growth, perhaps malignant. So Drummully’s spread into Northern Ireland, threatening such vital unionist organs as Enniskillen, might have been feared. Conversely, the polyp might have been a candidate for excision from the Free State, if only to simplify policing of the frontier.

And in fact, touring the new Border in July 1924, the chairman-designate of the Boundary Commission, Mr Justice Feetham, spent two hours in and around Drummully, making notes. But the commission changed nothing. The Polyp remains as it was in 1921 and, barring a few incidents during the Troubles, has been declared benign.

Apart from the 100 or who live there, most people’s contact with the area is limited to the Clones-Cavan road, which cuts through the area and crosses the frontier four times in seven miles.

This is the bit I drove through recently. And even as someone who grew up near the Border, well educated in the narcissism of small differences (copyright Sigmund Freud) that determines your sense of identity in those parts, I found it difficult to tell which jurisdiction I was in at any moment.

The drumlins that give Drummully its name are no less rounded on either side. The trees look the same too. Even the cut of the hedgerows – once a reliable indicator of a farmer’s religion – offer no real clues.

The biggest difference I noticed was that, on the Dublin-ruled sections, the road-margin lines are yellow, as opposed to white. There was also a section of the A3, as the road is known in the North, that looked slightly overpainted, as if to show up the N54 (the route’s name in Irish).

But the quality of road maintenance is no longer a definitive guide to which side of the Border you are on. And indeed, the paintwork on another section of the A3 looked, if anything, distressed.

It would be hard to convince a tourist that this is an international frontier over which, not so long ago, nearly 4,000 lives were lost. Indeed the irony of the Border’s current invisibility is only added to by one of the few giveaways about which side of it you’re on, the trade in explosives.

Well, small explosives anyway. On a stretch of the A3, there are two filling stations in quick succession whose petrol price displays are one clue to your whereabouts. But an even bigger clue are the advertisements for fireworks, a commodity you still can’t buy legally in the peace-loving South.