An Irishwoman’s Diary on Carolina Oliphant, the Flower of Strathearn 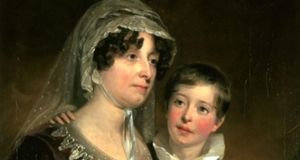 The birthday of Robbie Burns is celebrated on the 25th of January with all that is best in the Scottish tradition. At Burns suppers, the haggis is held aloft and ceremonially led in by a piper where it is addressed in verse before it is cut and served. Men in kilts and ladies in plaids recite Robbie’s poetry and his songs are sung. But somewhere, lurking in the background, there is the spirit of a woman who should be equally celebrated.

I found her when I was lost in the Highlands on my way to Loch Ness and stopped to ask for directions. The man sitting on the churchyard wall smiled “Yer in Gask,” he said, “the birthplace of Carolina Oliphant – Lady Nairne – the Flower of Strathearn. Have you ever heard of her?”

There was enough poetry in that statement to sit there with him in the sunshine and be informed.

This little girl grew up to be such a beauty that she became known as the Flower of Strathearn and had numerous suitors. It seems strange then that it wasn’t until she was 40 years old that she married William, Major Nairne, who later succeeded to his family’s title of Lord Nairne and thus Carolina became Lady Nairne. Can you imagine the absolute delight of the couple when at 43 years of age, Lady Nairne produced a son – an heir to the title.

Life was good but the lady had a secret that she didn’t divulge even to her husband for a very long time. She composed poetry that was published under the pen name of Mrs Bogan of Bogan. In the 1790s she became interested in the way that Robbie Burns reworked old Scots songs. His theory was, that by adding words to the traditional airs, they could be preserved forever.

It was she who wrote the haunting lament Will Ye No’ Come Back Again – “Bonnie Charlie’s noo awa’/Safely owre the friendly main/ Mony a heart will break in twa/Should he ne’er come back again”. She showed a love of Nature and the countryside in such lyrics as – The Rowan Tree – “How fair wert thou in simmer time, wi’ aa thy clusters white/ How rich and gay thy autumn dress, wi’berries red and bright!”

songs Her words are simple and direct in their appeal to the emotions. Her Jacobite songs are her best loved work and she stands second only to Robbie Burns as author of the most popular Scottish songs. She composed the stirring

Lady Nairne was grief-stricken when her husband died in 1830 and could not bear living in the house without him. She moved to Ireland where her husband had been born and set up house at Enniskerry, Co Wicklow. There is a story told that when she discovered a damp patch on a wall of her cottage she drew scenery over it to disguise it. She recorded in her diary that she visited Powerscourt House and met Edward Irvine the saintly preacher. She travelled throughout Europe with her son but in the winter of 1837 the youthful Lord Nairne caught pneumonia and died in Brussels in his thirtieth year.

Carolina Oliphant, Lady Nairne finally returned to her home in Gask just two years before her death. One of her final poems is the heart-wrenching The Auld Hoose: “The wild rose and the jessamine/ Still hang upon the wa’/How mony the cherish’d memories/Do those sweet flowers reca’”.

On Sunday , January 25th, Robbie Burns’s birthday is celebrated gloriously in Scotland but sometime during the night there might just be a couple of songs that he cannot lay claim to. The spirit of Carolina Oliphant, Lady Nairne, smiles.