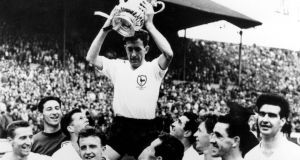 In all his time presenting This Is Your Life on television, the host Eamonn Andrews only had one refusal after he produced his famous big red book. The “victim”, who did not want his life story told to millions of viewers, was Danny Blanchflower, the Tottenham Hotspur footballer born in Belfast in 1926. He considered the programme to be an invasion of privacy. “Nobody is going to press-gang me into anything,” he was quoted as saying.

Although Blanchflower died in 1993, his memory and achievements have now been honoured by the Ulster History Circle, which has unveiled a blue plaque to him in east Belfast, where he came from. His name already lives on in a park in the same area, as well as in the lounge at Tottenham’s White Hart Lane ground in north London. According to the official Spurs website, the Blanchflower lounge offers an “informal matchday experience where complimentary gourmet deli sandwiches are served”.

In 2009 he topped a poll to be named Tottenham’s best player of all time. He was also one of only a handful of players to have been awarded the accolade of English Footballer of the Year – not once but twice: in 1958 and 1961.

Blanchflower started his playing career in 1945 with Glentoran in Belfast, then moved across the water to Barnsley and Aston Villa, before joining Spurs in 1954. Gradually he grew more influential and in 1958 completed in what many feel was his most inspirational campaign, leading Northern Ireland to the last eight of the World Cup finals in Sweden. They were beaten by France in the quarter-finals but came within a whisker of a semi-final appearance against the might of Brazil. The world premiere of a new documentary about the finals, Spirit of ’58, produced by Evan Marshall, will be shown at the Movie House in Belfast on April 22nd.

At the age of 38, Blanchflower retired, having played more than 330 games for Spurs. He forged a successful career as a freelance journalist writing for the Observer and the New Statesman, as well as an incisive column for the Sunday Express.

Blanchflower captained the Spurs side that won a coveted FA league and cup double in the 1960-61 season, the first team to perform this in the 20th century. The historic event, which gripped the imagination of the public, spawned a hit record, Tip Top Tottenham, by the Totnamites, the first of its genre. To this day there are still Spurs fans (after a run of defeats they call the team “Tottering” Hotspur) who can name, without hesitation, the line-up, from the unflashy goalie Bill Brown to Cliff Jones, the fastest winger of his day.

Other legendary names included John White, tragically killed by lightning in 1964, and the combative Scots midfielder Dave Mackay, who died on March 2nd this year. Mackay, it was often said, provided the brawn to Blanchflower’s brain, and they had a dazzling partnership on the pitch.

A loquacious and free-thinking man, Blanchflower was noted for his humour. One of his oft-quoted remarks about footballing tactics was: “We aim to equalise before the other team score. We should get our retaliation in first.”