End of an era as postcodes set to arrive 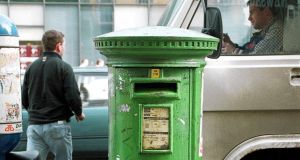 Another aspect of Dublin’s heritage is about to disappear but will anyone really bother when the perjorative D4 is turned into DO4, which doesn’t have quite the same ring to it. Dublin’s postal districts will be transformed into new sets of letters and numerals with the imminent new postcodes, which will also give individual addresses their own alphanumeric “identity”. The old postal district numbers will form the basis of the first part of these new postcodes. But nowadays, when hardly anyone writes personal letters any more, will many people take notice of the nationwide switchover?

The postal districts in Dublin date back to 1917, when they were also introduced in cross- channel cities. Postal districts had started in London in 1857, but it took 60 years for them to reach Dublin.

But before postal districts took shape here, the daily postal service was little short of miraculous, with up to six collections and an equal number of deliveries daily. In the days when the postcard was the equivalent of today’s email, people in Dublin could write to other addresses in the city and the note would be delivered the same day, very handy for dinner parties and soirées among the better-off.

The idea of postcodes has also been slow to take off; they began in England in 1959 and they’ve been used in Northern Ireland for the past 40 years. There, the BT part of the postcode was extended from Belfast to include every northern address.

This part of Ireland has remained the last bastion of the old postal districts of Europe, a distinction that’s soon going to disappear, as the postcode project, something like 10 years in gestation, comes to fruition. The only quick thing that happened was when the pillar boxes were painted green, almost overnight, in 1922. The then new British postal districts were retained.

Postal districts were centred first on the heart of Dublin and as the city expanded, so too did the postal districts. In most cases, districts north of the river Liffey got odd numbers while those on the southside got even numbers, another case of southside one-upmanship!

One of the two exceptions to this rule are the Phoenix Park and Áras an Uachtaráin, which are in Dublin 8. There’s a practical explanation for this anomaly. After the post office and sorting office in James’s Street were built in 1892, it began delivering the mail for the vice- regal lodge in the Phoenix park, since it was much more convenient than the old Phibsboro sorting office. So the park and the Áras got roped into Dublin 8, just as Chapelizod village, north of the Liffey, is in Dublin 20. This means that just two of Dublin’ s 24 postal districts span the Liffey.

Mind you, the public in Dublin didn’t start using postal district numbers until 1961, as reflected in the old green street nameplates. Only the new blue ones started using district numbers. As Dublin grew in the 1970s, some districts were split, with Dublin 5 retaining its nomenclature for that part of the district nearest the sea, while its inland area became Dublin 17. Then west Dublin was divided into two new postal districts, Dublin 22 and Dublin 24. Parts of Co Dublin managed to escape altogether; places like Dún Laoghaire, Blackrock, Lucan and Swords have survived thus far without having numbered postal districts. Other parts, previously in Co Dublin, such as Firhouse, Knocklyon and Tallaght, had numbers stuck on them. Foxrock became Dublin 18.

The really big split – and the huge rows – came in 1985, 30 years ago, when Kimmage, Templeogue, Terenure and parts of Rathgar became Dublin 6W rather than plain old D6. Many residents were affronted, afraid that their houses would lose value. An Post had come up with another solution; instead of Dublin 6W, they could introduce Dublin 26. But this had created even more furore as snobbish elements considered this too close to Dublin 24, otherwise known as Tallaght. So Dublin 6W came to be accepted, reluctantly.

One other city is also about to lose its postal districts, Cork, but these are only for internal postal use; they’ve never been used by the public. Cork city centre is actually Cork 1, while Douglas is Cork 2 and Wilton, Cork 4.

Dublin’ s postal districts managed to remain a secret to the public for 44 years but Corkonians, naturally, have gone one better. This time round, I suspect that the change over will scarcely raise a murmur, even from the D4 diehards in Ballsbridge, but then, who sends a letter these days except for business purposes?