A lock of hair

An Irishman’s Diary: Papers and propaganda for the First Dáil 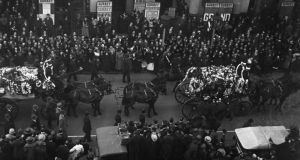 I recently came across a lock of hair in a file in the National Library of Ireland in Kildare Street. The lock of hair belonged to Muriel MacSwiney, widow of Terence MacSwiney, the lord mayor of Cork who died on hunger strike in Brixton Prison on October 25th, 1920. It was in the papers of Art Ó Bríain, who headed the London office of Dáil Éireann from 1919 to 1922. He later served as Irish Minister to France and Belgium in the 1930s.

The lock of hair was just one of the many unusual items that I came across in Ó Bríain’s files. Ó Bríain’s job was to act as a point of information for the First Dáil in Britain. As such, he would have been in constant contact with the members of the foreign press corps in London, distributing propaganda material including pamphlets written by Sinn Féin leaders such as Erskine Childers and copies of The Irish Bulletin, a clandestine newssheet that detailed acts of repression carried out by Crown forces in Ireland. Ó Bríain dined with journalists and representatives of the news agencies, doing his best to explain exactly what was happening in Ireland and to impress on them the need for Irish self-determination. Every day, Ó Bríain sent memos back to his superiors in the Department of Propaganda (later called Department of Publicity) in Dublin, updating them on his meetings with the foreign press representatives.

One French journalist, Joseph Kessel, who visited Ó Bríain at his office in Adam Street, just off the Strand in London in September 1920, later spoke about the unusual circumstances under which Ó Bríain operated. Kessel remembered visiting a very busy office with lots of mackintosh-wearing young men hanging about. Serene amid all the clatter of the office, a pipe-smoking Ó Bríain was calmly giving orders, scribbling down messages and answering the telephone, all at the same time. Years later, Kessel said that the fact that the Irish had such an office in London at that time would be akin to the FLN having an office in Paris at the height of the Algerian War.

Terence MacSwiney’s hunger strike and death in Brixton Prison marked a major turning point in the War of Independence. His case was closely followed by many around the world through their newspapers. Throughout the length of the hunger strike, Ó Bríain kept the media updated on the status of the lord mayor, issuing regular health bulletins in English and in French, detailing his worsening condition. These bulletins were used by newspapers around Europe, and further afield, to keep their readers informed of MacSwiney’s delicate state. A small article would appear on the front page with a line or two about the latest developments.

What the lock of hair was doing in Ó Bríain’s possession is not clear. Perhaps he was supposed to pass it on to a supporter of the lord mayor. Along with the lock of hair, the files also contain a curious collection of items related to MacSwiney. There are telegrams, poems, letters, prayers and postcards from individual supporters and organisations in Ireland, England, France and America expressing sympathy for him during the hunger strike and also upon his death. One Grimsby resident, Wilfred Whiting, even sent a letter with two photographs of himself. He explained that he had read about the lord mayor’s deteriorating condition in the Daily Mail. Describing himself as “poor and honest”, with a record for life saving, he was offering to donate blood that could be used for a blood transfusion, the only thing that could save MacSwiney, according to what he read in the Daily Mail. In the photographs, he is wearing medals and standing beside a table of trophies, presumably for his life saving.

While the majority of correspondents in Ó Bríain’s files are sympathetic to MacSwiney, some correspondents are not so kind. A few letters attack Mrs MacSwiney for allowing her husband to die. “If my husband acted the fool as your man is doing I’d shake him”, one anonymous writer says. Another writes “congratulations on the death of your rebel husband”. Given the nature of this period in Irish history, emotion of one sort or another runs throughout Art Ó Bríain’s papers. But perhaps the most poignant item in the files is a receipt for the transportation of the remains of Terence MacSwiney from England to Ireland. According to the receipt, the lord mayor’s remains were transported from Euston Station in London to Cork via Kingstown (now Dún Laoghaire) at 6.20pm on October 28th, 1920.

Dr James Barry: the Irishwoman who fooled the British Empire
10