A brilliant and pioneering botanical artist

An Irishwoman’s Diary on Wendy Walsh 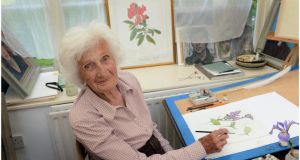 Wendy Walsh at work. She initiated a new era in Irish botanical art and encouraged a later generation of internationally acclaimed artists such as Susan Sex. Photograph: Brenda Fitzsimons

Botanical painting is highly specialised; it transcends making beautiful images. Long before the camera, it facilitated science. It is precise; demanding practice, patience, immense artistry, obvious genius and a natural appreciation of the genius in the ordinary. All of these qualities shaped the magnificent achievement of Wendy Walsh. She not only belonged to a great European tradition extending back to Albrecht Dürer and on to Georg Ehret and Ferdinand Bauer, she was part of the Irish school which had flourished with pioneers such as Katharine Plunket, Lydia Shackleton and Charlotte Wheeler-Cuffe, Wendy Walsh initiated a new era in Irish botanical art and encouraged a later generation of internationally acclaimed artists such as Susan Sex.

As recently on March 1st, at the Botanic Gardens in Dublin when the Irish Society of Botanical Artists was formally launched, an honorary membership scroll, decorated by Sex, was formally presented to Walsh, whose daughter, artist Lesley Fennell, accepted it on her mother’s behalf. It was a poignant moment, made even more profound as Wendy Walsh died two days later, a little short of her 99th birthday.

She was born in Westmorland, Cumbria on April 9th, 1915. Her father belonged to a merchant clan, Storey’s of Lancaster. When she was five, the family moved to London. They had nine servants. Wendy and her elder sister lived a privileged existence complete with a governess and were dressed like matching dolls by Mimi, her fussy, extravagant mother. Wendy’s paternal grandfather owned race horses and had a fine collection of equestrian art that included paintings by Stubbs.

Everything changed when her parents divorced. Home became a succession of rented accommodations. At 14 her education ended without ever formally attending school. Even the offer to attend art college had to be declined because she had to mind her younger siblings. Meanwhile her mother became increasingly depressed.

Wendy’s Walsh’s remarkable career as a botanical artist, culminating in An Irish Florilegium Volume 1 (1983) & Volume 2 (1988), all 96 original watercolour plates of which are kept in the Botanic Garden library, began after settling in Ireland in 1958. Yet she had already lived an entire life before that, dominated by dramatic wartime experiences. She first visited Ireland in early August 1938, to attend the Dublin Horse Show.

Later that same month her uncle and aunt invited her to join them on a trip through much of central Europe. Their arrival in Salzburg coincided with Chamberlain’s return to Britain bearing the now ironic promise of “peace in our time”. The next day while seated in a restaurant she watched as two SS men arrested an elderly couple. On reaching Budapest the party was advised to return immediately to Britain.

War had become a reality. She reported as a volunteer to a hospital at Aldershot, a 12-mile cycle from Hall’s Farm, a rented property. Food shortages meant that she had to have her horse, Pandora, put down, a sacrifice she never forgot. It was also in Aldershot, a couple of years before the war, that she had met her future husband, John Walsh from Longford, who was an officer in the British army.

All of her male cousins died in the war. In 1942 John Walsh was posted to north Africa, while she returned to Hall’s Farm. Their daughter, Lesley, was nine months old when her father saw her for the first time. Their second daughter, Anna, was born as England prepared for D-Day.

Food was Walsh’s wartime priority, not painting. She bought a cow and milked her twice daily. In July 1947 she and the girls began the long trip to join John Walsh in Japan. There she adopted the Japanese technique of painting with a wet brush. Their son Michael was born in Singapore. The family settled in Lusk, Co Dublin, when John Walsh was appointed general manager at Trinity College in 1958.

Luckily her grandson Nick Wilkinson encouraged her to record her memories. Walsh was also unusual in painting trees as well as flowers. Her studies for Trees of Ireland (Lilliput, 1993) are superb. Her many projects with Charles Nelson have left a fine body of botanical works and her watercolour of Aesculus indicia , the Indian horse chestnut, raised from seeds supplied to the Botanic Gardens by Charlotte Wheeler-Cuffe, feature in Dr Nelson’s new study of Wheeler-Cuffe’s adventures in Burma. It will be published by the National Botanic Gardens on April 8th, the day before what would have been Wendy Walsh’s 99th birthday.