Going out: the best of what’s on this weekend 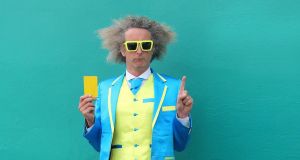 Roy Harper
DeBarras, Clonakilty, Cork, 8.30pm, €25
debarra.ie
At 75 years of age, Manchester- born songwriter Roy Harper shows little sign of retreating. He has lived in Co Cork for some years and so this venue is well known to him; expect, then, a familiar atmosphere, and a traipse through some of the most original baroque-folk songs of the past 40 years.

Prosumer
Pyg, Dublin, 9pm, €10 (also Twitch, Belfast, Sat)
soundcloud.com/prosumer
As a long-time resident at Berlin’s Panorama Bar, Achim “Prosumer” Brandenburg soundtracked the top floor of the fabled Berghain club with warm house and tech grooves. Originally from Saarbruecken and now based in Edinburgh, his adventures as a DJ began when he worked behind the counter at Hard Wax in Berlin before moving on to spin tunes at clubs worldwide. Support in Dublin from Colin Perkins, with Chug and the Twitch DJs in Belfast.

Boys Noize
Opium Rooms, Dublin, 10.30pm, €27.50/€25
boysnoize.com
Alex Ridha is the dude behind Boys Noize, someone who has proven to be a very successful operator when it comes to tough, infectious, dancefloor-friendly electro, house and techno. As a DJ, producer, remixer and artist (check his Mayday album from a few months back for a sample of his smarts), Ridha’s releases for International Deejay Gigolo, Kitsune, Turbo and his own Boys Noize have established his credentials as someone who knows how to tweak and turn a cut to rock a club. Support from DeFeKT.

Trouble Pilgrims/The Drays
Whelan’s, Dublin, 8pm, €15
whelanslive.com
There is an argument to be made for fuller appreciation of musicians of once critically acclaimed rock bands, and here are two of the strongest ones – Trouble Pilgrim features former members of The Radiators, and The Drays former members of Stars of Heaven. Each current band continues to deliver, respectively, gnarly garage punk (Trouble Pilgrim) and graceful Americana-hued rock (The Drays).

Tunes In The Church
St Nicholas’ Collegiate Church, Galway, Fri-Mon, 8pm, €15
tunesinthechurch.com
Solo harper Kathleen Loughnane kicks off the final weekend of concerts curated by Cormac Begley throughout the summer in this fine venue. It’s a place where well known and emerging musicians share equal billing, and this weekend is no different. Tomorrow night, Yvonne Casey and Terry Bingham celebrate the natural companionship that unites fiddle and accordion, and on Sunday, harpist Úna Ní Fhlannagáin sheds another light on our national instrument: fittingly, given the raft of commemorations happening throughout this centenary year. The final session on Monday will see Japanese duo, Junji Shirota and Mareka wrap these summer tunes in the church up with guitar and fiddle. A suitably lateral thinking end to an eclectic programme of concerts.

Caitlín and Ciarán
Park Hotel, Glengarriff, 8pm, €14/€12
caitlin.ie
A duo who have been steeped in the tradition from the cradle, Caitlín Nic Gabhann is a concertina player and sean nós dancer with a lightness of touch that stretches from her fingers to her feet. Ciarán Ó Maonaigh, a former TG4 Young Traditional Musician of the Year, is a fiddle player with a richly diverse repertoire. Their eponymous album from last year, set the bar high, so no surprise that they’re touring extensively to celebrate it.

Jika Jika!
Ebrington Square, Derry, 2pm, £20,
facebook.com/Jika­Jika
It’s a big night for the Jika Jika! team as they oversee the Cocoon takeover in the heart of Derry. Label boss Sven Vath is the big draw on the bill, the German producer who has been overseeing quality techno releases since back in his Harthouse and Eye Q days. He’ll be joined in the northwest by Josh “Higher State of Consciousness” Wink, Christian Burkhardt, Dana Ruh and the Jika Jika! DJs.

Marcel Dettmann
Limelight, Belfast, 9.30pm, £17
marceldettmannrecords.de
Anyone who’s ever gone to – or even tried to go to – Berlin’s Berghain will know its long-standing resident Marcel Dettmann. One of the current bigwigs on the worldwide club circuit, Dettmann always draws a crowd with his tough, minimal, melodic style of techno. As a producer, he’s also highly regarded, with releases on Berghain’s in-house label Ostgut Ton and his own MDR. Support from Belfast tech don Phil Kieran and the excellent Schmutz.

Fatboy Slim
Titanic, Belfast, 6pm, £35
belsonic.com
Belfast’s Belsonic series comes to a close for 2016 with some Saturday night fever courtesy of the DJ who has been successfully bringing the rave to clubs, arenas and beaches and stages for yonks. It’s 20 years since Norman Cook introduced Fatboy Slim to the world. Cook is a man with many different alter-egos – see Freak Power, Beats International and Pizzaman, for instance – but Fatboy Slim’s fondness for good times and clubtastic highs have seen him prosper. Support from Sydney house-pop wizards Hugo Gruzman and James Lyell aka Flight Facilities.