FOMO and bed hopping on the Irish festival trail 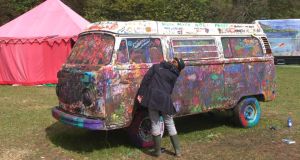 A VW gets a makeover at last year’s Vantastival

No sooner have the daffodils released their brilliance and the first auld fella commented on the stretch in the evening being grand, and it’s back. I got me a chronic case of FOMO (Fear of Missing Out) that’s a mofo.

Camden Crawl and Vantastival are both revving up for the May Bank Holiday weekend. The Crawl has a stronger line-up, with choice choon merchants to make sessionistas salivate, but Van demons land has open spaces, sound heads, no queues, a chilled atmosphere and a BYOB policy. I was always shite at Top Trumps.

Buzzing round Das Kapital on Friday night and then heading up the road to Bellurgan Park on Saturday to kick back in the van till Monday would be ideal, but NYC’s Mantra Percussion have been announced to perform Michael Gordon’s Timber in St Peter’s, Drogheda on Saturday, May 4th. Bastardos! Yet another tripolar weekend beckons.

The condition cranks a notch up when considering concurrent Body & Soul and Sea Sessions. The theme at Ballinlough this year is balance: nice & bold, ying & yang, wild & free; all being quite useful. Good music, punter participation, food for thought and late-night wandering amid wonders in the woods make this festival a shining light.

Sea Sessions’s theme is a consistent one: a sprinkling of surfers, skaters and strand sports that flavour prime partay time in Fundoran. This bash on the
beach forgoes subtlety and minimalist design and heads straight for the jugular with a line-up that would get Maggie Thatcher dancing (too soon?). A serious dose of the Natalie Imbruglias here. I’m torn.

There are as many festival line-up launches popping up as there are daffodils, and it’s no accident. Serial festival-goers plan their summer campaigns in advance, and though there is often an extra “impulse buy” thrown into the mix based on who’s going, who’s playing and even the weather, there will be lots of tickets bought well in advance, especially for those events that look like the might sell out. The early-bird offers target the Christmas market and try to incentivise early decisions, but they drop off as peak flogging season rolls around – and we’re just about there.

Two noticeable omissions from the current here-we-go hoopla are Electric Picnic and Oxegen. The “will they won’t they” vibe has reached a level not seen since Scully used to lean closely over Mulder’s shoulder to have a very close look at grainy UFO pics whilst breathing on his ear. The good news is that they eventually did get it together; jaysus but it took a while.

Vantastival claims bragging rights for being the first fest of the summer, and disregarding the crawlers altogether, possibly on grounds that you can’t piss in a hedge without fear of arrest whilst Camden Crawling. I’m pretty sure there is no first festival of any season and that you can occasionally relieve yourself in a carefully selected inner-city hedge unaccosted. Phase One in Carrick-on-Shannon feels like starter’s orders for the forthcoming onslaught of hedonist happenings.

Next Friday, Ulrich Schnauss will be flying the flag for Elektroische Musik drawing heavily on credit from his German sample- bank. Drum’n’bass fiends of old will be making shaky hand movements and raising their knees to the chest-pounding thump of LTJ Bukem on Saturday night. This is Phase One’s first offering and it looks like the real deal: a clatter of mixed discipline Irish elctronic artists on show, music-production workshops, and a chance to get buzzed up and slightly electrocuted by some hands-on circuit-bending. High hopes for this one.

While we wait to see if Oxegen will ever get off with Electric Picnic, I’m proud to reveal a lynchpin of the Irish Festival calendar has just been confirmed. Muff Festival runs from August 1st to 5th. I’m praying they have T-shirts. Want!