Zoe Kazan: ‘Look at the numbers. It’s getting worse for women’ 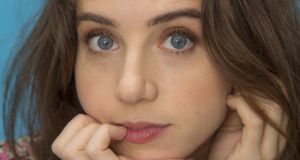 Zoe Kazan’s abiding cultural memory of Ireland, where she shot What If with Daniel Radcliffe, is the National Wax Museum. Photograph: Tony Cenicola/The New York Times

Nothing can really prepare you for how disarmingly honest Zoe Kazan is. The grand-daughter of Hollywood legend Elia Kazan and, for 11 years and counting, one half of a celebrity coupling that also features Paul Dano, the 33-year-old Yale graduate, playwright, and star of stage and screen is seldom guarded.

She’ll happily admit to sleeping with teddy bears into her teens, and notes that “having to stop playing dolls was really hard”. She’s frank about her famous partner, Paul: “He’s a little bro-ier than people expect. He’s a lad. He likes sports. I think people would be surprised by him given his sensitive nerdy persona.”

She even has an embarrassing local confession. Her abiding cultural memory of Ireland, where she shot What If with Daniel Radcliffe, is the National Wax Museum.

“The first day I got to Dublin I was really jetlagged and I was trying to stay awake,” she recalls. “It was raining really heavily. But it was a Monday. So all the other museums were closed. I’d never been to a wax museum before and I was so scared. Absolutely terrified.”

Really? “Oh yes. One of the spookiest experiences of my entire life. I don’t do well with the uncanny.”

She has recently spoken out against on-set sexism, noting that when she was younger, a male producer thought nothing of inquiring whether she “spat or swallowed”.

Last November, she authored a characteristically candid essay for the New York Times chronicling her teenage battle with anorexia: “The causes for my eating disorder ran along the usual lines: depression, an inability to express my rage, a desire to exert control, a desire to feel less, a desire to have my body express the things my voice could not. That, and I had gotten in the habit of believing it was better to take up less space. When I met the boy I fell in love with, I was a year into this disease and subsisting on less than 500 calories a day.”

She has subsequently recovered and moved on to an enviable career. She has appeared in mainstream hits such as Nancy Meyers’s It’s Complicated and Sam Mendes’s Revolutionary Road. There have been cultish indies, including Tamara Jenkins’ s The Savages, David Gordon Green’s Our Brand is Crisis, and the feminist-flipped Pygmalion update, Ruby Sparks, which she also wrote. That screenplay was shortlisted for the 2013 Independent Spirit Awards, adding to the plaudits already garnered by her plays: Absalom, We Live Here and Trudy and Max in Love.

Yet while growing up in Los Angeles, Kazan, the daughter of two screenwriters – her mother, Robin Swicord, wrote Memoirs of a Geisha and The Curious Case Of Benjamin Button; her father, Nicholas Kazan, wrote Reversal of Fortune and Fallen – was determined to avoid the family guild.

“I saw how lonely and isolated that life can be,” she recalls. “I don’t think they’re lonely. They have a lot of friends. They go out. But I think I’m more introverted than they are. I read through fire alarms as a kid. I have that kind of absorbing relationship with my imagination. I wrote from a very young age. But I so badly wanted to be an actor and I felt that I had to concentrate on that. It’s just I was so bored between jobs as an actor. I don’t think boredom is very good for anyone. So I picked up my writing – in a serious way – to escape.”

In The Big Sick, Kazan plays Emily, a white American psychotherapy student, who falls in love with Kumail Nanjiani, a Pakistani-American comedian. Silicon Valley star Nanjiani, who plays himself, keeps his relationship with Emily secret from his conservative Muslim parents, while his hopeful mother keeps inviting possible wives to dinner.

Emily discovers the truth, just as a mysterious illness sees her hospitalised and placed in a medically induced coma, leaving Nanjiani to make small talk with her angry parents (played by Holly Hunter and Ray Romano).

Acting is such a strange profession. You make out with other people and then go home to your normal relationship

That’s got to be odd, playing Nanjiani’s wife, while the real Emily V Gordon, who co-wrote the screenplay, watches from the side-lines, in a thinly fictionalised, meet-cute version of their IRL romance?

“You know, acting is such a strange profession anyway,” smiles Kazan. “You spend all your time pretending that things are true that are not true. You make out with other people and then go home to your normal relationship. So this actually didn’t feel that far beyond my ken. And Emily is a really great person and we hit it off immediately.

“By the time I came on-board, the character had already been fictionalised to a great extent. I didn’t feel like I had to imitate her. And I think it would have been weirder if she wasn’t there.”

The Big Sick marks a welcome return to form for super-producer Judd Apatow.

“Judd Apatow does this very unconventional rehearsal process where he tapes these long improvs,” says Kazan. “You read the scene and you improv around it. And then you do the scene again but you switch the power dynamic. And then you do something else. It’s very creative and there’s no end result attached to it. And then they go back and pick what worked from those improvs and put them into the script.”

The same week that The Big Sick premiered in Sundance to positive reviews, Donald Trump issued his first travel ban. The irony isn’t lost on Kazan, who has lately become  an advocate for healthcare and other issues that bring her into direct conflict with the current POTUS.

She’s delighted that Nanjiani has now joined the thin ranks of high-profile, South Asian, Anglophone movie stars, and that her co-star – who grew up in an Urdu-speaking Shi’ite Muslim family in Karachi – has subverted Hollywood’s pre-existing rom-com requirements.

“I didn’t feel as responsible for those issues around representation because it’s not my life experience. The thing that I kept raising were tropes about women on screen. . . . I don’t think there’s anything mainstream or conventional about this story. And sometimes when something is really unique, audiences don’t always embrace it. But we’ve gotten very lucky so far.”

“I just wish there was a wider range of material available and a wider range of women involved. I don’t mean to complain. I know that it’s easier for me than it is or some people. But it’s demoralising when the majority of projects you read are compromising in some sense.

“I also think there’s a misunderstanding about why we want representation. It’s not for tokenism. It’s not so we can feel included in the conversation. It’s about social and economic parity.”

The Coolest South-Asians in Hollywood

Riz Ahmed  The Wembley-born rapper and star of Nightcrawler and Rogue One just appeared on Time magazine’s “The Most Influential People of 2017” list.

Aziz Ansari  The star of Parks and Recreation has won an Emmy and a Peabody for his writing on the hit Netflix series, Master of None.

Mindy Kaling The creator and star of The Mindy Project will soon be seen in the gender-flipping Ocean’s Eleven spin-off, Ocean’s Eight, and in Ava DuVernay’s keenly anticipated A Wrinkle in Time.

Dev Patel The hits just keep on coming for Londoner Patel. The star of Slumdog Millionaire, The Man who Knew Infinity, and Lion is currently the bookie’s favourite to take the lead in Guy Ritchie’s live action remake of Disney’s Aladdin (opposite Will Smith’s Genie).

André Leon Talley: How Anna Wintour threw her right-hand man ‘under the bus’
7