Wild Mountain Thyme: Bejapers, isn’t it only after arrivin’ at last? 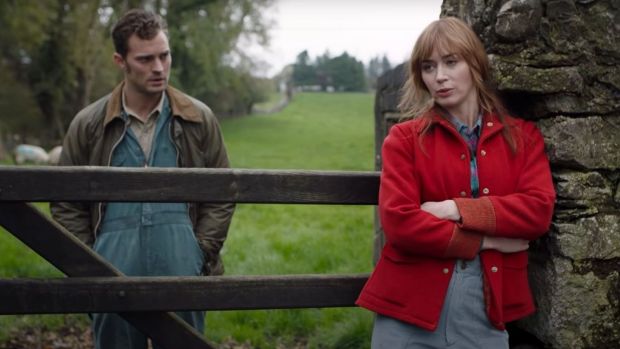 What are we doing here? Jamie Dornan and Emily Blunt

Is this thing back?

Anyone who lived through the undignified relish with which the nation – this writer included – greeted the trailer for John Patrick Shanley’s fat-headed Micksploitation comedy could be forgiven for believing the film had long ago passed through the collective bowel and flushed where waste matter belongs. It says something about our insecurity that we so savour getting apoplectic at any such caricature of the national psyche.

Aside from anything else, the accents really aren’t that terrible. Emily Blunt and Jamie Dornan achieve a tolerable generic Irishness that generously extends vowels to all four provinces within each sentence. A decade or two ago, we would have applauded Christopher Walken for making a decent fist of his elderly bogman.
There the excuses must end. Viewing the entire film as it finally arrives to video on demand, one remains staggered that sentient human beings who walk upright and use cutlery believed this was a respectable use of their valuable time.

You will already know the plot. Based on Shanley’s play Outside Mullingar (honestly, the funniest title for anything, ever), Wild Mountain Thyme concerns the romantic tensions between Anthony Reilly, a shy wee farmer, and his beautiful neighbour Rosemary Muldoon, a wild-spirited colleen with thunder in her belly.
So unavoidable is the elephant in the room – or do I mean pig in the parlour? – that it scarcely seems worthwhile pointing out the film’s everyday deficiencies.

Perhaps this is why so few eviscerations have discussed the deranged miscasting of the male lead. It takes a while to register that Yummy Dornan is supposed to be an unglamorous, middle-aged daddy’s boy who freezes up at the sight of a pretty girl. It is as if they had cast Cary Grant instead of Ernest Borgnine as the lead in Marty. My homeboy Jamie can take this as a compliment.

Never mind that. We are here to take one more pass over the film’s fascinatingly deranged attitude to contemporary Ireland. Anthony goes to the lake in a coracle and attacks a tree with a hurl. An auld fella leaning over a stone wall catches him rehearsing romantic approaches to a donkey. Maybe the film is set in the 1940s? No. The irrepressible Rosemary, who smokes a pipe and wears hobnail boots to the pub, makes some reference to freezing her eggs. The title and the incidental music reference a song – “Go, lassie, go!” the chorus repeats – associated most often with Scotland.

We could go on – and many have. This is a version of the nation in which every citizen feels a neurotic need to constantly remind themselves (and us) of their own Irishness. The very first line, delivered by twinkly Walken, is “Welcome to Ireland”. Much later, one of the two leads asks: “Tell me, standing on this holy land of Ireland, why shouldn’t you marry me?” We already know we live in the bleeding place. Why are they forever addressing the topic? You know we only speak this way for the tourists, Mr Shanley?

Let us never mention it again.

On premium video on demand from today