Whatever picture wins the Oscar, it will be seen as a comment on Trump 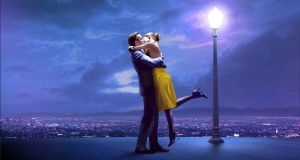 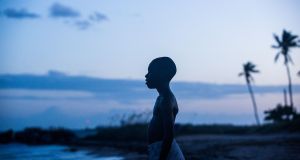 The fightback: for the constituencies excluded and alarmed by the rise of Trump, it’s Moonlight 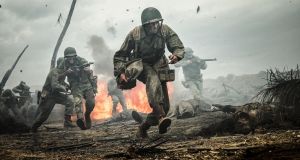 The right-wing stuff: for patriotism, the military and Mel Gibson, it’s Hacksaw Ridge

Let’s save ourselves some time and declare that this year’s Oscar winner for best picture has much to tell us about Donald Trump’s America. True, the nominations will not be known until January 24th. The winner will not be announced until the end of February. But we already know enough to outline essential hot takes on Hollywood’s uncanny ability to bottle the zeitgeist. You heard it here first.

The US film industry has always seemed more entwined with its era’s political discontents than the TV business or the music world. Just think of those films that, despite their being about something else altogether, were really “about McCarthyism”: Invasion of the Bodysnatchers, High Noon, On the Waterfront, Rio Bravo. Twenty years later, every second film was really “about Watergate”. Despite being conceived before the scandal reached maturity, Chinatown, The Conversation and The Parallax View – each released in the year of Nixon’s resignation – are now seen as key Watergate texts. Don’t forget that Avatar, the most financially successful film of all time, was really “about Iraq”.

So something will have gone terribly wrong if the Oscars fail to honour a film that fits comfortably into the Trump conversation. Among those seriously competing for a nomination, Pablo Larraín’s superb Jackie offers the most explicit parallels with the current situation.

Natalie Portman is beautifully shocked as Jackie Kennedy. In the wake of her husband’s assassination, she is forced to organise the transition from a glamorous youthful court (Richard E Grant lurks wittily as William Walton, the abstract expressionist painter who advised on cultural matters) to an older, brasher administration characterised by Texan swagger. Much rehabilitated in recent years, President Lyndon B Johnson was no Donald Trump, but the accidental nods to the recent interregnum are unavoidable.

Never mind that. Jackie is not going to win best picture. The film has been ecstatically reviewed, but it is just a little too muted and eccentric to score with the white-bread voters of the Academy of Motion Picture Arts and Sciences.

The picture that most persuasively argues for a swing towards the right is Mel Gibson’s Hacksaw Ridge. Andrew Garfield plays Desmond Doss, a conscientious objector who, despite refusing to carry a weapon, won the Medal of Honor as a combat medic in the second World War. Patriotism. The military. Mel Gibson. Everything is in place for a piping-hot take on theUS’s re-engagement with traditional values.

Forget it. The academy has been known to forgive, but, mindful of Gibson’s intemperate anti-Semitic rages a decade ago, the electorate will be reluctant to give that film-maker the most prestigious of its gongs.

One of three films is going to win the Oscar. If the prize goes to something other than Kenneth Lonergan’s Manchester by the Sea, Barry Jenkins’s Moonlight or Damien Chazelle’s La La Land, then we may as well declare Oscar punditry a pointless waste of time that has no value beyond distraction from the painful truths of worldwide moral decline. And who’d want to say that?

Those films have dominated nominations at critics’ circles, the National Board of Review, the professional guilds and the Golden Globes. Review aggregation sites, such as Metacritic, rate them as the three best-reviewed US films of 2016. Nothing looks likely to catch up with them now.

If Manchester by the Sea wins, then we can all write about a study of the overlooked Americans who helped Trump into the White House. Yes, Lonergan’s film is set in Massachusetts, a very blue state, but it goes among the constituency that voted most vigorously for Trump: working-class white men.

The film begins with Casey Affleck, playing a bereaved caretaker, losing his temper with the upper-class inhabitants of a Boston apartment building. Partly through his own irresponsibility, partly through wretched circumstance, the protagonist has become disengaged from the American dream. The body of the film sees him fuming around a seaside town in a state of simmering depression. Who stands up for such blue-collar Americans? Well, not Donald Trump obviously, but he certainly pretends to stand up for that group. Will this do? Nine hundred words by lunchtime?

In perfect, elegant contrast, a win for Moonlight could be read as a triumph for the constituencies excluded and alarmed by the rise of Trump. Jenkins’s film, which came from leftfield to win raves at the Telluride Film Festival, comprises a triptych detailing a gay African-American’s coming of age in and around Miami. The child of an exploitative, drug-addicted mother, the protagonist finds comfort in friendship with an unexpectedly responsible crack dealer. But descent into violence and incarceration proves irresistible.

These are the Americans of Black Lives Matter. These are the LGBT Americans who worry about a retreat into repressive puritanism. All facetiousness aside, a win for Moonlight really would feel like a fightback by those who can’t accept Trump as their president.

Hang on a moment. The most likely winner of the Oscar – odds on at time of writing – is an airy musical that flits between Stanley Donen’s Technicolor America and the French version of that world pastiched in Jacques Demy films such as Les Parapluies de Cherbourg. Do you feel your take cooling dangerously?

Fear not. La La Land, which stormed the Golden Globes, is, of the three most likely winners, the most ideally suited to post-Trump opinion-page rationalisation. For longer than I have been alive, pundits have been arguing that popular culture responds to grim times with glossy, escapist distraction. A thousand theses discuss how the Great Depression brought on the Broadway musicals of Busby Berkeley in the US and the coarser upbeat stylings of Gracie Fields in Britain. When the US slipped into debt and overseas embarrassments during the Carter era, Hollywood responded with banging amusements such as Star Wars and Grease.

The melodic love affair between Ryan Gosling and Emma Stone in La La Land could hardly be better suited to this hottest of all takes. No more commentary is required. We have it sorted.