The Florida Project: joyful and moving - one of the best of Cannes 2017 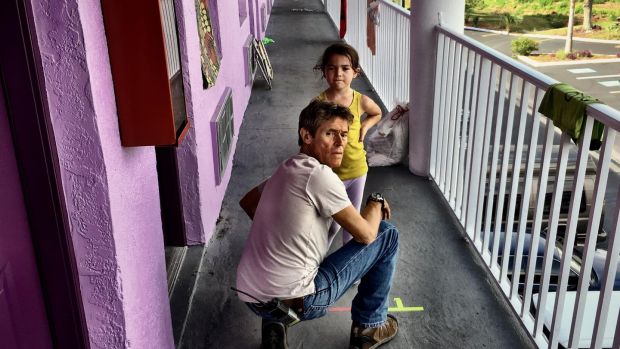 Willem Dafoe and Brooklynn Prince in The Florida Project

Not for the first time, some of the best film in Cannes can be found a few hundred metres from the Palais in the (literally) underground cinema that hosts the Director’s Fortnight. The Florida Project is a case in point.

Two years ago, Sean Baker broke new ground by shooting the super Tangerine, a tale of Los Angeles’s trangender community, entirely on the camera of his iPhone. He uses more old-fashioned equipment for his follow-up, but the film is every bit as energetic, humanistic and imaginative.

If you wanted to be reductive you could describe The Florida Project as “Tangerine with Children”. The young heroes of this wonderful film pinball around Orlando in similarly dangerous fashion to the hustlers in the previous picture. But The Florida Project is very much its own pink plastic beast. It is one of the great films about childhood.

We are in the low-rent penumbra that surrounds Disney World. Cheap motels with aping names like the Futureland Inn – painted purple, pink and pistachio – host meaner tourists, resting drifters and poor mothers like the unstoppable Halley (Bria Vinaite). She is, in many ways, a dreadful nuisance: loud, unruly, disorganised. But she is also endlessly hilarious and – though parenting skills are rudimentary – she desperately loves her six-year-old daughter Moonee (Brooklynn Prince).

The film begins as it means to continue with Moonee competing with her pals in a gobbing competition on a neighbour’s car. The causes an inevitable fight, which Bobby (Willem Dafoe), the long-suffering manager of the motel, is forced to defuse.

We then follow Moonee as she and her pals bounce mischievously around the not-so-magic kingdom. They experiment with recreational arson. They beg money for ice cream. And so on.

The Florida Project is a film about the victims of capitalism, but, for most of its duration, it is unexpectedly joyful and positive. These are good people in wretched places. Playing against type, Willem Dafoe makes a secular saint of Bobby. He diplomatically obeys the owner’s demands by keeping Halley in line. When an apparent child molester appears, he adroitly sends him on his way.

Halley is a more complex figure. She does many of the wrong things with Monnee, but no mom could shovel more affection on her child. The Florida Project makes an interesting comparison with Alexey Zvyagintsev’s Loveless, which played earlier in the festival. The Russian film dared to say there are such things as near-irredeemably bad parents. Baker is much more generous to his subjects. Some people just cope indifferently with the demands of family life.

The Florida Project, however, succeeds most conspicuously in its treatment of the children. Prince is funny without being cutesy. She is cheeky without being obnoxious. Her wonderful performance helps The Florida Project – despite the lack of much narrative structure – sit proudly beside such great studies of childhood as The 400 Blows, Fanny and Alexander and Boyhood.

It really is that good. And we haven’t even mentioned Alexis Zabe’s striking, sun-blasted photography. The last shots are a genuine marvel.