From the archives: ‘A tantalising and unconventional contemporary thriller which turns unexpectedly romantic’ 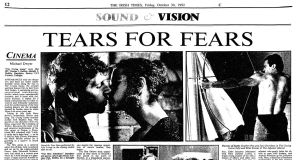 Among the items in the collection are personal correspondence, drafts of film scripts, story boards, production files, notes and photographs.

Below, we take a look back at the review of Jordan’s 1992 film The Crying Game. The piece was written by Michael Dwyer and first appeared in the paper on Friday, October 30th, 1992.

Appearances truly are deceptive and there are many unpredictable twists along the way in The Crying Game, the seventh and best feature film to date from Neil Jordan. A tantalising and unconventional contemporary thriller which turns unexpectedly romantic and is laced with dry, ironic humour, it makes for a heady concoction that is richly inventive and brilliantly sustained. And the performances of the four leading players are the strongest elicited by Jordan since he made Mona Lisa seven years ago.

Taking its title from Dave Berry’s melancholy sixties pop song, The Crying Game reunites Jordan with Stephen Rea, who starred in the director’s first two films, Angel and The Company of Wolves. Rea gives the most vivid and sensitive performance of his film career as Fergus, a Provisional IRA volunteer with “a killer smile and a baby face” — so he is told by Jody (Forest Whitaker), the black British soldier he is guarding as a captive in South Armagh.

The film opens at a carnival where the off-duty Jody is seduced and set up by the single-minded Provo, Jude (Miranda Richardson), and taken to a remote area where he is held hostage in a glasshouse. Fergus surprises himself by befriending his loquacious captive who talks about race (Northern Ireland is the only place in the world where he has been called “n****r” to his face, he says), his passion for cricket, and his relationship with Dil (Jaye Davidson, who resembles Mona Lisa star Cathy Tyson), the London beautician he loves. “If they kill me, and they will as sure as night follows day,” he tells Fergus, “I want you to find her out and tell her I was thinking of her”.

When Jody meets his fate it is not as he or we expected it, and there are many more surprises in store for Fergus, and for the audience — and one particularly startling revelation literally has to be witnessed on screen to be believed and ought not to be given away here. Gradually, Fergus es.forced to face up to a complex multiple dilemma while Jordan turns on the tension, sexual and dramatic.

The film tellingly uses the story of the scorpion who asks a frog to carry it on its back across a river, promising not to sting the frog; halfway across the river, the scorpion stings the frog and as they both sink, the frog asks why the scorpion broke his promise. “Because it’s in my nature,” the scorpion replies. Time and again throughout The Crying Game, Neil Jordan confronts elements with in the nature of the principal characters he has created and he keenly observes how they respond to questions of loyalty, politics, love, desire and destiny.

This bold, provocative picture has been conceived with a compelling dramatic unity and executed with firm narrative assurance and power. Jordan tops it all off with a very witty use of Stand By Your Man performed by Lyle Lovett as the closing credits start to roll.